Apple’s annual WWDC22 was held yesterday and it released four major operating systems. The company released the iOS 16, watchOS 9, macOS Ventura, and iPadOS 16. Shortly after the release of these systems, users are already spotting “plagiarism”. A Weibo user wrote, “When the macOS Ventura demo came here, I suddenly remembered the One Step of SmartisanOS”. Luo Yonghao, CEO of Hammer Technology (Smartisan), forwarded the Weibo message with the comment “Well, this year they let themselves go a bit, and copied four or five in one go. Last night, I saw some Hammer friends were angry again, but it’s not necessary. Jobs did so much back then. Product innovation, the difficult ten or twenty years in the middle are also regarded as fools by snobs; WebOS has been copied by Apple, but today’s people don’t even know it exists.” 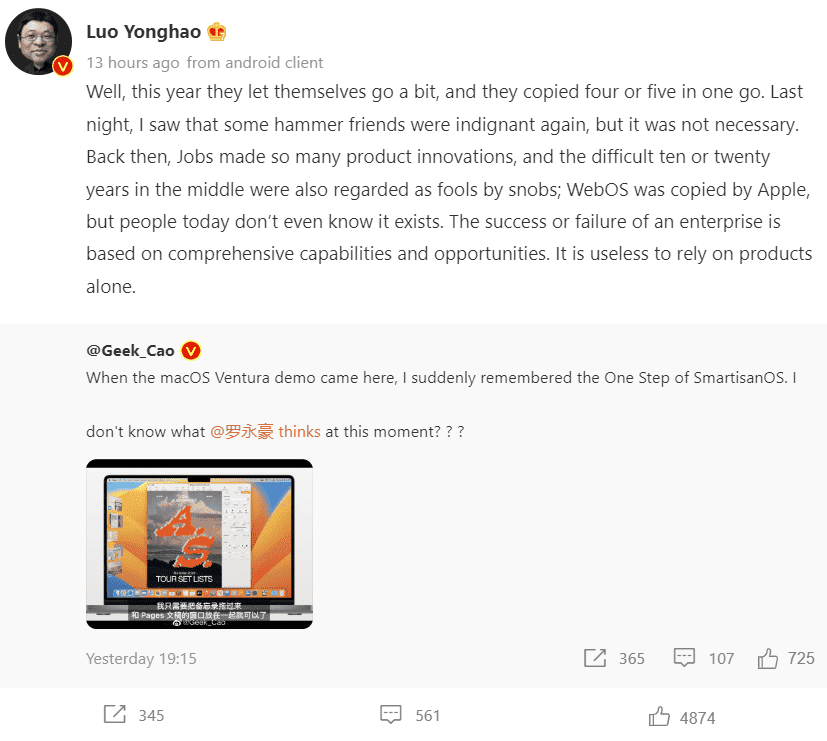 Luo Yonghao said bluntly that “the success or failure of an enterprise depends on comprehensive capabilities and opportunities. It is useless to rely on products alone”.

Is Apple losing its innovative prowess?

As one of the focuses of WWDC22, iOS 16 has attracted continuous discussions among netizens after its release. What makes everyone complain is the gradual Android lock screen interface. In addition to supporting a custom lock screen, iOS 16’s new functions such as keyboard typing vibration, viewing Wi-Fi passwords, and hiding photo albums are all Android-Inspired.

The iOS 16 Earth super wallpaper is a direct copy of the MIUI 12 wallpaper which Xiaomi released in 2020. While Apple fanboys are still trying to defend the copy, the SmartisanOS copy hits the web.

It’s a good thing that Hammer CEO, Luo Yonghao, acknowledges the work Steve Jobs put in for the smartphone industry. Ten years ago, almost the entire smartphone market was copying Apple. We had Xiaomi smartphones which were a complete rip-off of Apple’s devices. Even the MacBook and other Apple products had Chinese copies. We are talking about copying a whole device here from design to hardware. Those were the years when Apple was innovatively active.

For the past three years, Apple has been innovatively dormant. The company has now moved from “doing it first” to “doing it better”. Apple is stuck at 25W charging while the Android end is already discussing 200W. However, this is not an issue for Apple fanboys because they believe that Apple will “do it better” when it gets to 200W.

However, it is high time we face reality. Apple is losing its innovative capacity, who knows what it will copy next.

Next Moto G82 5G Goes Official In India With An Instant Discount Of Rs. 1,500