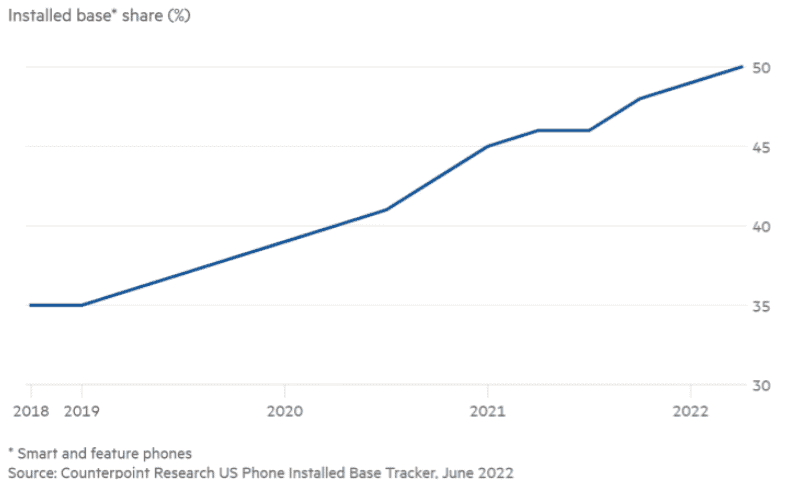 Since its launch in 2007, Apple’s iPhone‘s market share in the United States has been struggling with all the Android brands put together. The several Android brands has been just ahead of Apple. However, the situation is now different in the second quarter of this year. According to industry analysis firm, Counterpoint Research, Apple’s share of the US smartphone market now exceeds 50%. This is the highest level of Apple since its launch and its a milestone for the company.

Apple is doing well in the U.S.

While Apple has over 50%, the remaining market share is shared by over 150 Android phones led by Samsung and Lenovo. Jeff Fieldhack, director of analytics at Counterpoint, said, “The operating system has never changed dramatically. But the traffic movement has been moving from Android to iOS over the past 4 years. This is a major milestone that we may see in other rich countries around the world”

In addition to new phone sales, this data also counts millions of users who have entered the Apple ecosystem through the second-hand market, as well as users who use older iPhones. At the earnings report in July this year, Apple Chief Financial Officer Luca Maestri said that the installed capacity is the engine of Apple’s business growth. That number continues to grow, with all-time highs in every country and every service category, a very important achievement,” Maestri said.

Next Xiaomi may launch smartphones with 200W fast charging next year