Blackview, the rapidly growing Chinese Rugged Phone brand, has been playing an important role in leading the development of rugged phones. For a long time, Blackview has been committed to creating more possibilities in rugged phones. In addition to fulfilling the basic functions of practicality, they are adding more value to rugged phones. As advertised by the company team, Blackview is preparing to make the release of its latest flagship rugged phone BV9200. Which is claimed to be the best rugged phone so far. With several upgrades in entertainment, battery life, efficiency, personality, and practicality.

But what are the specifics and details of the rising star? Let’s check out some interesting pre-launch details. 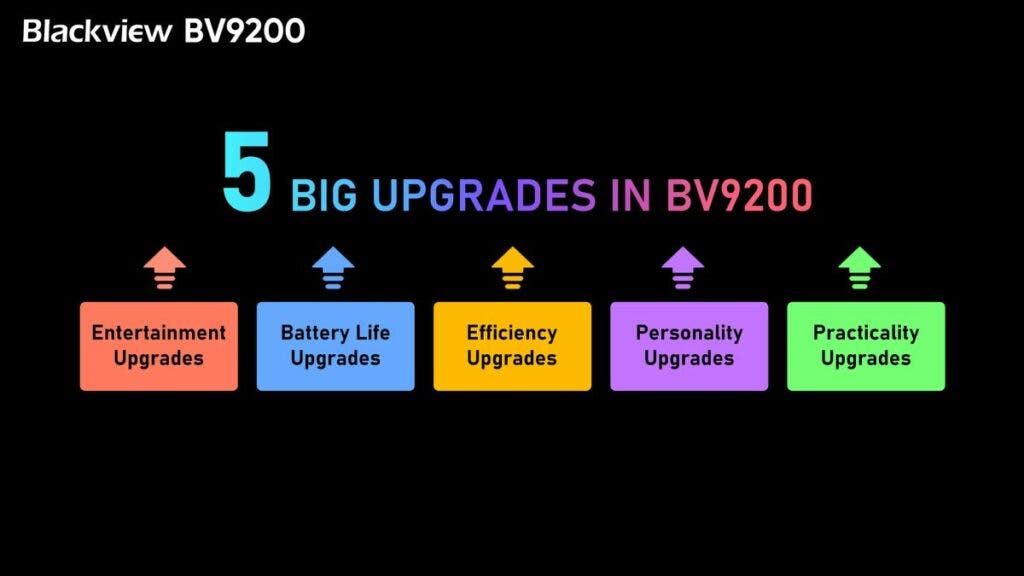 According to the official leak, Blackview has put a lot of effort into BV9200. Achieving a major breakthrough in several areas, including entertainment, battery life, efficiency, personality, and practicality. It’s not only a breakthrough for the brand itself, but also a significant breakthrough for rugged phones. 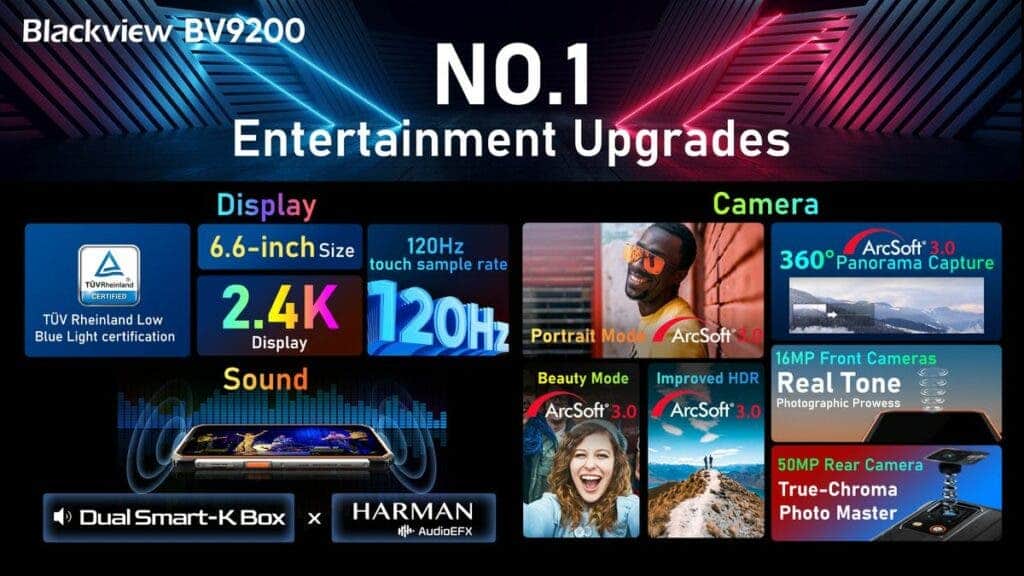 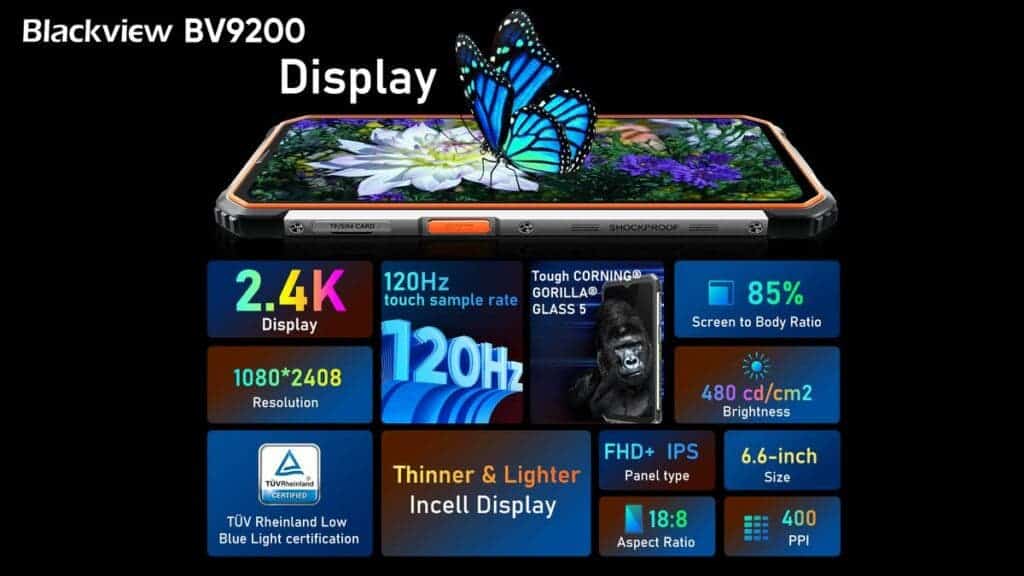 Blackview BV9200 seems to have a practical display which is 6.6-inch  in size, with a 2.4K high resolution. Combined with an excellent 120 Hz high refresh rate it provides you with sharper and clearer viewing enjoyment without boundary limitation. It’s statedm that the display is certified by TÜV Rheinland Low Blue Light. Which can reduce hazardous blue light to make sure people’s eyes are best protected when using phones for long periods of time. Notably, the material of the BV9200 display is also made by Tough CORNING® GORILLA® GLASS 5. Which raises the bar for protection against damage from drops and scratches. Allowing you to work or explore outdoors without any fear. 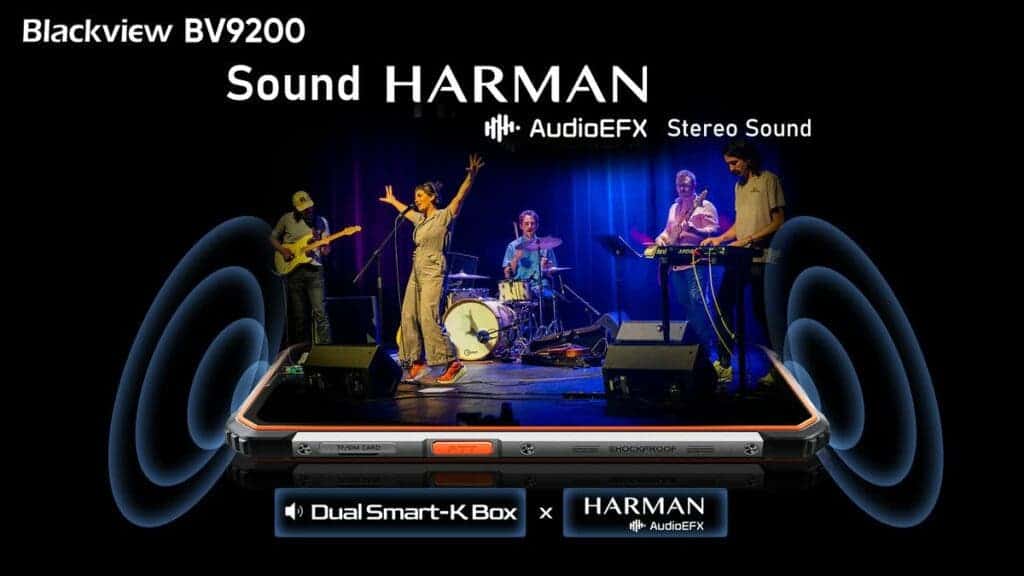 Based on the official leak, Blackview BV9200 is supported by Harman AudioEFX for the first time as well. Which contains 5 different voice modes including Smart, Music, Movie, Games, and Voices. Giving users the opportunity to enjoy the same high audio quality of BWM in any case. Remarkably. Dual smart-PA BOX speakers are also adapted to Blackview BV9200 to get top sound quality with maximum volume, making it a good choice for party enthusiasts to be in the spotlight. 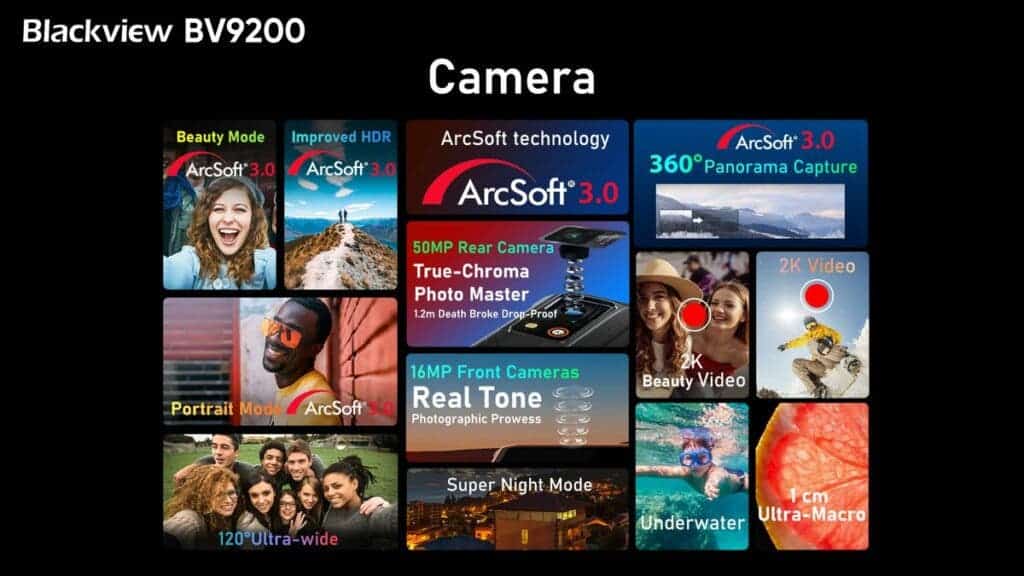 Camera-wise, earlier leaks indicated, that the Blackview BV9200 is believed to offer a huge breakthrough in color reproduction with a triple camera setup. Blackview BV9200  will supposedly feature a 16MP Samsung® 5K3P9 sensor as the front camera, which renders up to 30% improvement in real-tone photography. That accurately restores the real tone of diverse skin of ethnicity, age, and gender. Switching to the back, it features a 50 MP Samsung® JN1 rear camera. Guaranteeing true-to-life colors in every shot, capturing everything by what you see with the naked eye.

Another feature is the  8MP Rear Cameram which can shoot at 120°Ultra-wide & Up to 1 cm Ultra-Macro. With a single shot,  BV9200 is capable of delivering entire scenes for landscapes, as well as macro details for inanimate objects without changing the hue. Another highlight might be that BV9200  takes camera-drop issues into consideration and makes the camera achieve a drop resistance of 1.2m.

In addition, Blackview BV9200 is rumored to be powered by the ArcSoft® Algorithm with 15% Better Photographic Results through Advanced 3.0  Version HDR Mode, Beauty Mode, Portrait Mode, and Panorama Mode. HDR Mode makes great shots in high-contrast situations. Beauty Mode enhances your appearance intelligently. Portrait Mode highlights subjects with a blurred background. Panorama Mode records the wilder frame by one image. Aside from the nodes listed above, some new camera modes have been added to aid in taking better pictures. Including Super Night Mode, 2K 30fps Video Recording with Beauty and Underwater Modes. 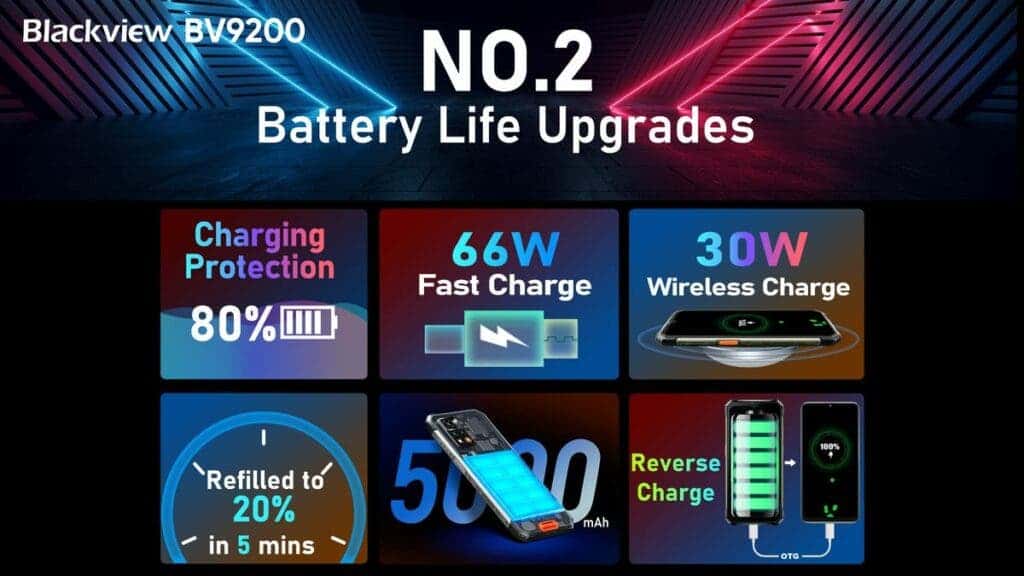 If the claim turns out to be true,  Blackview BV9200  will be your best company while you are on long trips outdoors. It draws from a generous hefty 5,000mAh battery and supports up to 500 hrs standby. If  It is out of battery, 66W wired flash charging will power the battery to 20% in only 5 minutes. As well as 30W wireless charging without fussing with cable, making you time saved and free for charging at any time. What surprises us most, is that  5W Reverse Charge technology is possible for BV9200 too. So it works as a power bank and solves the low power problem of other devices.

What’s more, BV9200 is equipped with a Coulombmeter. A robust digital instrument, that measures the electrical charge accurately, making you exactly the master of your phone battery. Coming to charging protection, BV9200 may be available with Intelligent Charging Protection and Customized Charging Protection. Protecting the phone from over-charging by intelligent or customized settings. 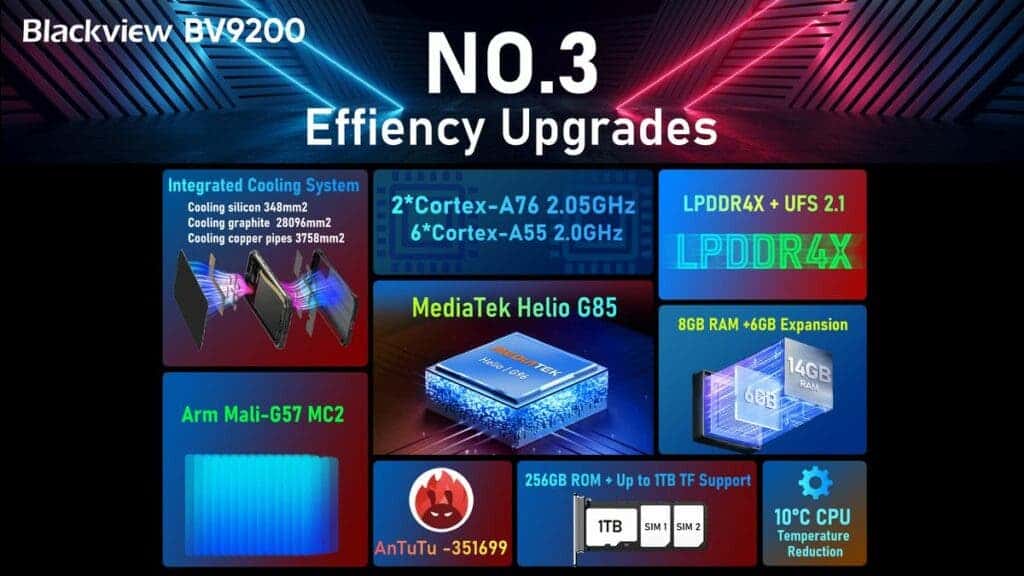 Blackview BV9200 should be powered by the new MediaTek Helio G96, featuring a sustained performance that makes it the dark horse in the professional rugged phone. In addition, it will pack 8GB RAM onboard, that can be extendable with another 6GB by virtual RAM technology. Which turns free storage space into RAM temporarily, giving you extra processing power for multitasking. For storage options, the Blackview BV 9200 is most likely to come with 256GB. And there’s expandable storage with a micro SD card slot that supports up to 1TB storage as well. Offering enough storage space for thousands of photos and videos, along with dozens of apps.

The planned integrated cooling system in BV9200 is worth pointing out too. It will deliver up to 10°C CPU temperature reduction and a 15% improvement in heat dissipation. Preventing overheating issues during long-term use of the phone. 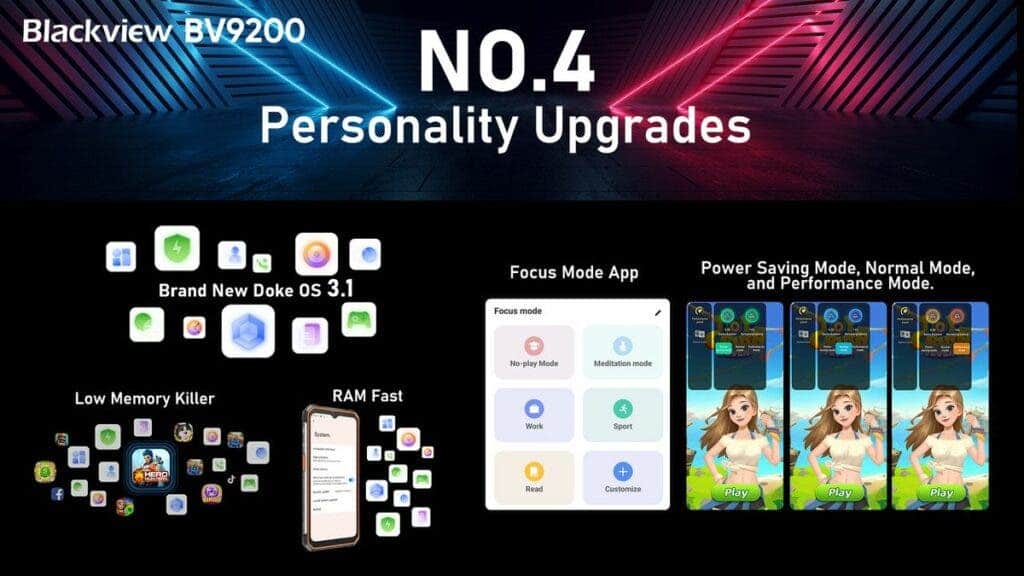 As the Blackview leaks suggest, they will release its latest mobile operating system , Doke OS 3.1 with it too. And  it’s possible, that Blackview BV9200 will be the first phone to run it. Doke OS 3.1 is based on Android 12 and has a redesigned user interface with convenience and simplicity based on their design concept. Instead of being heavier than its predecessor, Doke OS 3.0, Doke OS 3.1 is relatively lighter. Thanks to Blackcview’s team, that aims to keep the latest OS as light as possible. Doke 3.1 will adopt Pre-Loading tech to improve the average app-launching speed by 27%, helping you open the app fast by preloading them first.

The core improvement comes with Low Memory Killer feature, which keeps the system performing at acceptable levels by killing the least essential processes. We should get some new updated features too. Including the Focus Mode App, Health App, and Fun game App. Which are all designed for controlling the usage of phones, recording daily health data, and playing preloaded games for free. For game lovers, Blackview BV9200 will meet your different gaming needs with three dedicated gaming modes including Power Saving Mode, Normal Mode, and Performance Mode. 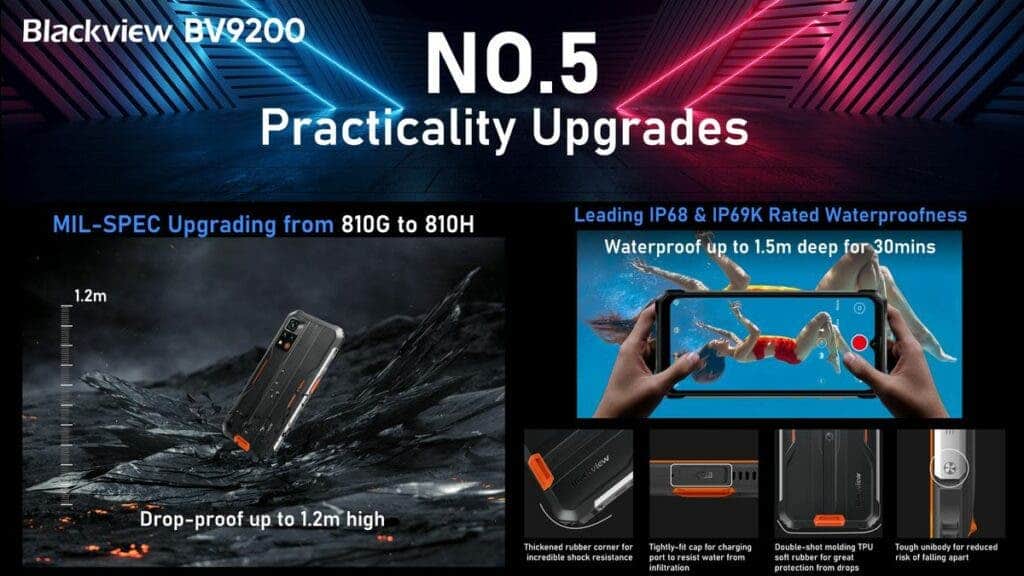 Blackview BV9200 should be also 30% lighter and 20% slimmer than its rugged precursor. With a 13.6mm slim & 310g light body, while it does not sacrifice any of its robust performance as a rugged phone. BV9200 inherits all the rugged traditions with thickened rubber corners, an aluminum alloy side frame fixed with screws and a tightly-fit cap for the charging port. Providing a wide range of protection for possible challenges. And BV9200 still offers excellent protection against the elements with its  IP68 & IP69K and MIL-STD 810H ratings. Making it drop-proof up to 1.2m high and waterproof up to 1.5m deep for 30mins.

The Blackview BV9200 is expected to make its world premiere at Aliexpress from January 9th to January 13th, 2023, PST. Do you want to get the latest news about it ? You can also click here for more information.