Motorola is gearing up to introduce a new set of mid-range and low-end smartphones. The company started its journey into the “2023 season” with the Moto G53, now it is preparing more affordable contenders. The simplest entry in the series is coming soon in the form of the Moto G13, and the device has been a target of multiple leaks in recent weeks. Now, the phone got its design revealed through a new set of renders. It joins the Moto E13 which also had its visual revealed yesterday.

Just like the Moto E13 renders, the Moto G13 renders come as a courtesy of the folks at MySmartPrice. However, the differences are notable. Although the Moto G13 is the lowest entry in the Moto G-series, its design is fancier than the Moto E13. The low-end phone has huge bezels all around and an old teardrop notch design. The Moto G13, on the other hand, has a fancier look with a punch-hole cutout. Apart from the design, we’re pretty sure this is a regular LCD screen. Hopefully, it has at least a 90 Hz refresh rate and a Full HD+ resolution. 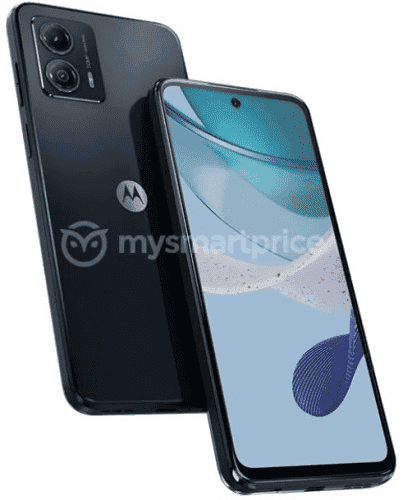 Moving around to the back, the Moto G13 packs a dual camera setup with an LED flash. It’s a new trend for brands to reduce the number of cameras. Unfortunately, these setups are usually composed of the main camera and a secondary depth sensor. Therefore, we don’t think the Moto G13 will get some love for Ultrawide shots. Anyway, the leaks point to a 50 MP resolution for the main camera.

The side frame of the Moto G13 houses the volume rocker and the power button. This power button seems to double as a fingerprint scanner. The feature seems to be absent on the Moto E13. Moving on, the bottom part of the phone has a USB Type-C port. Moreover, it has a microphone and a speaker grille.

We don’t know exactly which CPU will be powering the phone. The Moto E13 has the modest Unisoc T606. We expect something more capable for the Moto G13. We will have to wait for more details. There is no forecast for the launch of the new phones. However, considering the number of leaks, they might appear early in January.

Next YouTube Music Casting UI To Get Live Lyrics