Chinese manufacturing giant, Xiaomi, has officially unveiled its latest flagship series, the Redmi K60 series. This device will commence sales on Dec. 31st and the starting price of the series is 2,499 yuan ($326). With the release of this series, the company is changing the positioning of the Redmi K series. The Redmi K60 series is stronger in terms of camera and fast charging. It brings the ultimate performance experience to users. According to Redmi general manager, Liu Weibing, the Redmi K60 will have no competing products in 2023.

Although it is different from the Pro model in terms of performance, it is completely sufficient to meet the needs of almost all users. The Snapdragon 8+ Gen 1 chip uses an advanced TSMC 4nm process which boosts the overall performance of the chip. The power consumption and heat control are also very good. 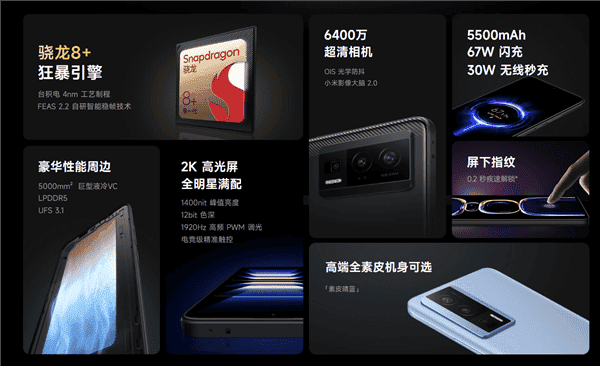 In terms of heat dissipation, the Redmi K60 has a built-in 5,000 square millimetre giant liquid-cooling VC sink. The company calls this cooling system a “cooling master”. It uses a new gen. of gaming-grade stainless steel VC sink. The area has reached the peak of Redmi history, and there are 17 layers of three-dimensional heat dissipation space. This can easily stabilize the violent performance and its use time can be quite long without any significant heating.

At the same time, the standard version of this mobile phone comes with a top 2K Chinese screen. The display of the standard model is the same as the Pro model and Redmi had to collaborate with top Chinese display maker, TCL Huaxing Optoelectronics for the display. The display has a resolution of 3200 × 1440 and supports 1920Hz high-frequency PWM dimming. In terms of battery life and charging, the Redmi K60 supports 67W wired + 30W wireless. With a built-in 5500 mAh large battery, the battery life is stronger than the Pro version.