Xiaomi raised the bar for fast charging with the Redmi Note 12 Explorer and its 210W charging. However, the company will lose the crown pretty soon to Realme and the Realme GT Neo5. The upcoming flagship killer will come with the so-called Realme 240W fast charging. We don’t know exactly when Realme will present the new smartphone, but it’s coming soon. When it comes to the 240W charging, the brand already has a date to reveal it – January 5. During a tech event in China, we will have more details about the new tech that will power the GT Neo5, and presumably, future Realme phones. Today, a new leak reveals the 240W charging in all its glory. 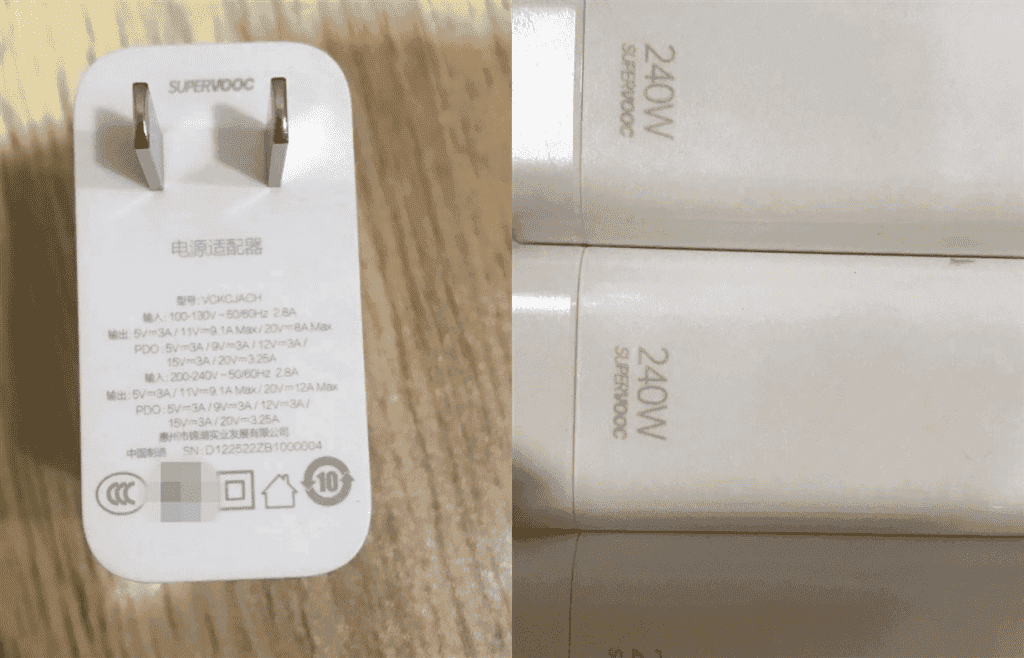 In this world of leaks, it’s natural to see the charger appearing ahead of the event. Thanks to a set of live images, we know more details about the upcoming charging tech. As per the leaked images, the upcoming charger packs model number VCKCJACH. It shows 20V power at a 12A current. Interestingly, the charger is branded “SuperVOOC”, proof that the new standard comes straight from Oppo’s R&D labs. As a result, we don’t expect it to be exclusive to Realme phones, more devices from Oppo, Vivo, and OnePlus can bring the same or at least similar speed in a near future.

According to rumors, the Realme GT Neo 5 will bring Realme 240W charging and Snapdragon 8+ Gen 1 SoC. However, that will be the “high-end” version. The rumors also point to the launch of a secondary option with just “150W” charging. Moreover, this variant may even bring a different processor. We wouldn’t be surprised to see two options with distinct charging speeds. The Realme GT Neo3 from last year came in 80W and 150W charging tiers. The lesser one had a bigger battery.

The Realme GT Neo5 will adopt the dual-cell battery standard. Therefore, it will be able to withstand charging speeds without major sacrifices. Anyway, we don’t expect a 5,000 mAh capacity. Realme will likely bring safe numbers such as 4,500 or 4,600 mAh. We expect further details about the Realme 240W charger to be revealed in three days. We also expect Realme to take this opportunity to tease the GT Neo5.

Previous Meizu has a new owner! Will it bring back the glory days?

Next Is Fortnite returning to iOS in 2023? Apparently, yes