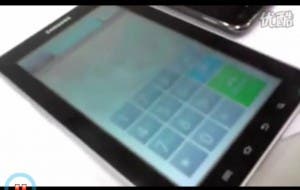 Looks like someone managed to get their grubby little paws on the Samsung Galaxy 7 inch tablet! A lot of expectation is pinned on to this Android 2.2 device which will support video calling, full web browsing and a lot more including that cool swiping SMS interface the Galaxy Phone has.

The video is after the jump and shows someone getting a quick go on one. The video looks very much to be a covert recording so not much can be made out but a few things of interest are shown such as the iPhoto style photo stacks, what looks like a phone keypad meaning the Galaxy Tablet can act as a massive phone and iOS style transitions between apps.

Previous No QPhone From Tencent... Yet

Next Official 10 Days Till iPad Launches in China!