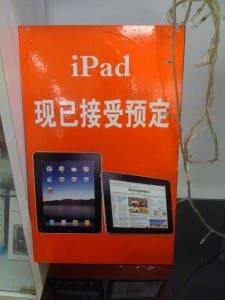 That’s right after so much speculation and rumor it seems like we’ve got confirmation of an impending iPad launch and in 10 days no less!

Our source? The Apple rep at the local department store! While shopping earlier this evening I popped over to the computer section as I often do to see if there was anything new and spotted the above sign which literally says:

Although, this confirmation came from the horses mouth there was one detail I found rather strange. The rep explained that if we bought a 3G model we would have to cut a regular 3G sim to fit!  Which sounds a little strange as it is China Unicom, China’s second largest network provider that is supposedly bringing the legal version of the iPad to the market, and the idea of them not having a micro sim ready for launch seems just a little odd. Luckily there are plenty of these available and cheap!

So 10 days to wait until we get some offical Apple love, about the same amount of time those poor soles in Beijing have been stuck in traffic!

Next Urinals In Women’s Toilets!