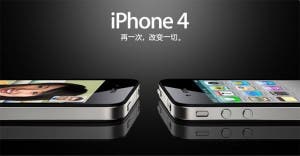 Today is the day that Unicom and Apple release pricing details of the iPhone 4 for the Chinese market, but have we already learned the real prices?
According to news reports a now deleted forum post at China Unicom claimed the 16Gb and 32Gb iPhone 4 would go on sale 20th September costing 4880 yuan – 5660 yuan respectively.
This news is going to be a bit of a blow to those who bought grey import devices as the official model is actually 1000 yuan cheaper than those illegally imported devices!
The news is still rumor and speculation however, and looking at the history of iPhone price rumors on China Unicom there seems to be a trend of knocking 1000 yuan off actual retail prices to stir up expectation before release, so it might be advisable to take a large pinch of salt with it until word becomes official.