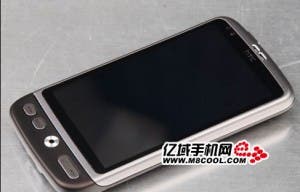 Whirring away at 533Mhz and churning along to the hum of Windows Mobile 6.5 sounds like an utter nightmare in an age of 1Ghz G4’s, Android 2.2 and Humming Bird, but this HTC Desire clone has some nice features up it’s sleeve which may warrant a second look.
That’s correct despite it’s outward appearance this is not a genuine HTC Desire. The very well made metal body is fake and the metallic buttons with excellent feedback are fake.
The 3.6 inch Sharp touch screen with excellent colors and visibility even in direct sun-light is not fake, nor is the Dolby stereo or the 8.3 mega-pixel camera which takes fantastic photos!

Join GizChina on Telegram
A knock-off like this makes me a little sad. It’s well made and feature packed, but it’s always going to be a fake. The company that make it will always be known for making cheap knock offs and the people who did the backward engineering are going to be known as technological forgers!
With so much talent why can’t they make something original?
On the plus side if you want a Desire for cheap look no further!