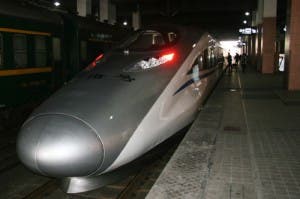 The high speed rail network connecting Hangzhou to Shanghai started operation yesterday (Tuesday 25th Oct).
China’s operational high-speed railways now cover 7,431km! The longest in the world!
80 trains traveling at speeds of up to 350Km/h work on the network carrying workers and vacationers from the 2 major eastern cities. The commute from Shanghai to Hangzhou used to last 1 hour and 15 minutes, but the new trains have cut that time by more than 30 minutes.

Keep reading to see a video of the new trains in action.

Next Google Pads Come In A Rainbow of Colours