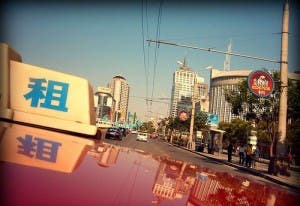 The problem with most modern GPS systems is that they rely on clear roads and typical speed limit time estimates. Sure they can tell you to slow down if you creep over the speed limit or even warn you of upcoming traffic, but for the most part, they’re unable to help drivers navigate around a traffic jam or problem area.
This is where the boffins at Microsoft research Asia come in. By analyzing over 30,000 Beijing taxi drivers GPS data logs they have built a software program called T-Drive that uses the cabbies real world routes to help drivers find short cuts and navigate around congested areas.
In tests the T-Drive system cuts 16% off a typical commute when following the taxi routes over traditional GPS systems and more than 60% of the routes worked out faster than the speed limit based paths.
The T-Drive system is still under testing and currently only works in the busy streets of Beijing, but the technology could easily be applied to other crowded cities.
For those of you not in a T-Drive area, but still need a reliable GPS solution check out the Mio Navi range of GPS navigation devices.