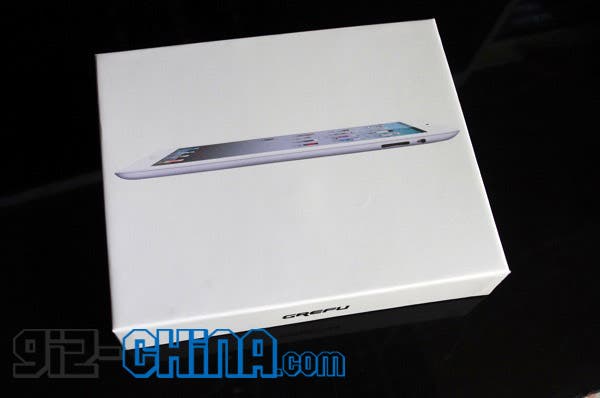 Grefu the cocky Chinese electronics brand who don’t mind knocking off Apple’s devices have taken their popular M97 Android tablet and have updated it with some new hardware making the most perfect New iPad knock off available!

Grefu have a long history of producing fake Apple products, the stand out devices being this Macbook Air and of course there popular 1.2ghz iPad 2 clone named the Grefu M97.

For 2012 Grefu have taken the M97 Android tablet and tweaked it a little to make the M97-2 a near perfect New iPad knock off.

Like the original M97 the new M97-2 runs an Android OS, but in this case the latest Android Ice-cream Sandwich 4.0 system.

The new iPad knock off gets a 1.1 ghz CPU which is actually slightly slower than the previous Grefu tablet, however they have made up for the slight loss in power by building in 3G, HDMI out and a mini USB.

For those of you worried that the small downgrade in CPU power might upset performance don’t as the Grefu new iPad knock off features a full 1GB RAM which is more than adequate for the majority of Android applications available today.

If you would like to get one of these excellent new iPad knock off’s from Grefu contact us now!