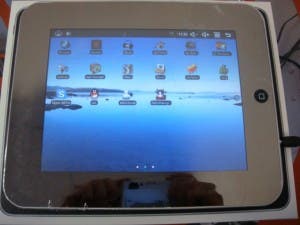 I personally wish Apple would either release a much larger screened iPhone, or possibly even better a smaller iPad mini which features at least 3G and GPS, but if you like me can’t wait for Apple to release the real thing, this Chinese made iPad mini might be of some interest!

Eken, the company behind this iPad mini inspired Android tablet and many other Android devices, have decided to launch their iPad mini tablet before Apple have a chance.

Like the genuine iPad’s this inspired model gets an IPS screen, but with a smaller 8 inch size making it easier to carry the Eken mini iPad around.

Android OS comes as standard and features full Flash support. As you would expect Wi-Fi, Bluetooth, SD card reader and a front facing video chat camera come as standard, although there seems to be a lack of rear camera.

Prices are around the $100 mark which make the Eken iPad mini the cheapest iPad Mini clone on the market to date!