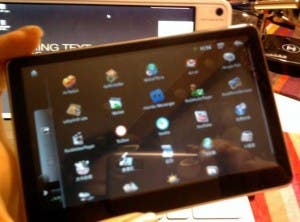 More rumors of a new iPad mini are spreading across the internet and while it looks as if Apple are taking no notice of what consumers want it does look like Chinese tablet makers are!

The W7 is Rockchips Android powered taken of what an an iPad Nano, iPad mini or possible even a larger iPad could look like, but rather than this just being a concept, this is a device you can go out and buy now!

Boasting an impressive spread of features such as 3G, WIFI and a 4.8 inch screen, this little iPad mini knock off could be just what consumers have been waiting for.

Prices start at $100 for the 8Gb model and rise to $150 for the 16Gb model which makes the Rockchips W7 iPad mini much cheaper than any Apple tablet and in direct competition with the iPod touch range of media devices.

Next Does This Chinese iPad Mini Hint At The Real Apple iPad Mini?