Chinese phone maker Kuphone seems to think the new iPhone could be nothing more than an updated iPhone 4S, so to prepare for it’s arrival they have launched their own updated iPhone 4S clone with some fantastic features.

Whether or not you believe Apple will launch an iPhone 5, new iPhone or updated iPhone 4S, there is no denying that the current iPhone 4S is a little long in the tooth are really need a few solid tweaks to bring it up to date.

And that’s exactly what KuPhone have done with their all new iPhone 4S clone, which is much more like and updated iPhone 4s2 or new iPhone clone than the original Apple phones.

Ok the overall look of the KuPhone S9 is that of the current iPhone 4S but the attention to detail the Shenzhen based phone maker has gone to make this clone unique is quite amazing.

First of all the body of the KuPhone S9 is available in a range o colours, which should keep most fashion conscious users happy, but that’s not all! KuPhone have actually done something which Apple hasn’t and has applied an anti static coating to both the screen and back side to help prevent fingerprints and marking! 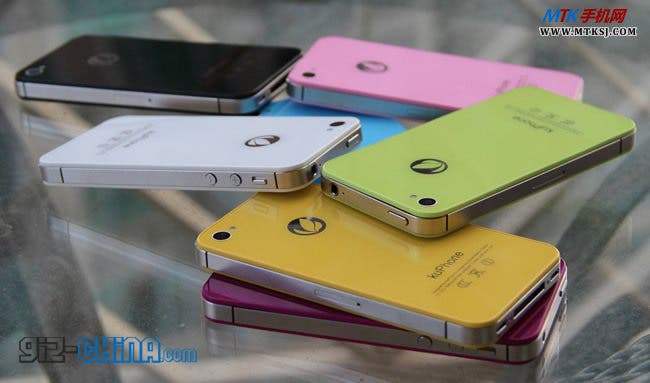 The screen itself is pretty impressive on the Kuphone S9 also as it feature 326ppi and a resolution of 960 x 480 across the 3.5 inch display which is the same as the iPhone 4S’s screen. Sure it’s small but it is a very high-end small screen.

The most impressive features of this Android iPhone clone are the ones we don’t see under the hood. A dual-core MTK MT6577 CPU and 1GB RAM propel the Kuphone S9 along much faster than the current iPhone 4S could every manage to do and scores an impressive 5400 points for performance.

Best of all is the price for this high imitation iPhone 4S clone which is rumored to be a stunning 888 Yuan which is about $140, however to get this low price the Kuphone only gets a 5 mega-pixel rear camera, but does support face recognition and the on board storage is a rather low 4GB.