UMEOX made a name for themselves earlier this month with news of their iPhone 5 mock concept phone which featured a 4 inch screen with iPod styling. While it looked rather cool this new ARC Concept with dual-core MTK6557 CPU is so much cooler!

After the news that JiaYu seem to be fiddling around with the MTK6557 equipped JiaYu G3 a little too much, I thought we were all need of some awesomeness and I think I have found it!

The UMEOX ARC is although currently in the planning stages could see production quite soon if everything goes to plan.

Unlike JiaYu, UMEOX seems to have settled on the specification already and are just waiting for the green light to make the ARC become a reality.

As ou can see from the mock-up designs of the Arc the design is reminiscent of the old iPhone 3GS, but much, much thinner and with a very slim looking bezel. It actually looks like the kind of phone I hope the iPhone 5 will eventually look like.

Specification highlights include a rather nice 5.3 inch LED screen with 960 x 540 resolution and tapered/curved edges much like the HTC One X (hence the ‘ARC’ name’). The CPU will be China’s current favourite the MTK6577 dual-core unit and there will be 1GB RAM on board. 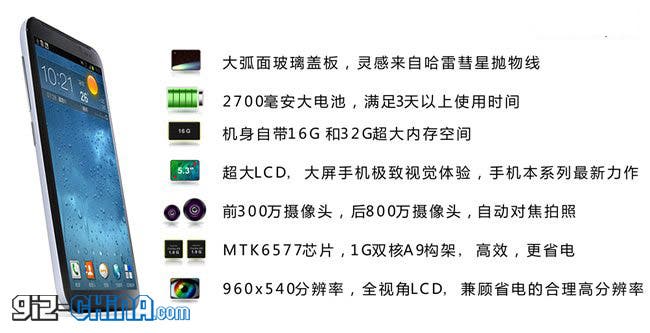 Front and rear cameras are both present with the rear being an 8 mega-pixel unit which one UMEOX employee stated as being better than the unit on the Newman N1!

Too models of the UMEOX ARC are planned one with 16GB of built-in storage and the other with 32GB, both will get the same 2700mAh battery.

No news on pricing yet but I’ll be sure to let you know as soon as I find out.

Next Give some money to Instacube I think I will!