Yesterday GooPhone released updated specifications and more photos of their GooPhone i5 phone now today we get our first glimpse at the GuoPhone G9 iPhone 5 clone, with 4 inch Sharp display.

GuoPhone are another Chinese phone maker which makes a living from producing clones of other brands hardware, and the GuoPhone G9 is their first iPhone 5 clone to launch since the genuine phone became available on the market.

There are some similar details between the GuoPhone G9 and GooPhone i5. Both offer a dual-core MTK6577 CPU, however the GuoPhone only get’s 512mb RAM rather than the i5’s 1Gb.

Screen size is 4 inch as you would expect from an iPhone 5 clone, and Guophone have sourced their 800 x 480 resolution unit from Japanese screen maker Sharp. 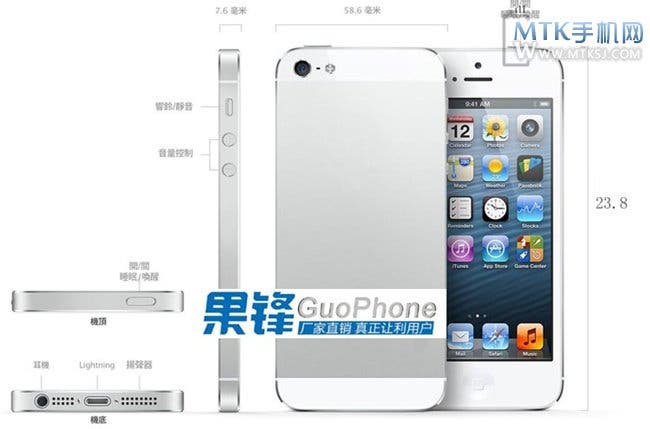 The rest of the specification is similar to other MTK6577 phones on the market with the phone offering 4GB of built in memory, SD card reader, 2 mega-pixel front camera, 5 mega-pixel rear camera, GPS, Bluetooth, Wi-fi ETC.