Chinese websites haven’t wasted anytime getting their hands on and first impressions of the Xiaomi Redmi Note published, here is one of the first.

Xiaomi have never been a company to follow the trends and are no stranger to launching entry-level phones with larger displays than their flagship models. Last year they launched the original Redmi which had a whole .5-inch on the then Xiaomi Mi2S. The same difference can be seen on the 5.5-inch Redmi Note when compared to the Xiaomi Mi3.

Xiaomi will offer two versions of the Redmi note. The top of the range version with 2GB RAM and 1.7Ghz octacore MT6592 processor and an entry-level model with a 1.4Ghz octacore chip and 1GB RAM. Both have 8GB of internal memory, updated cameras and a larger 3200mAh battery. 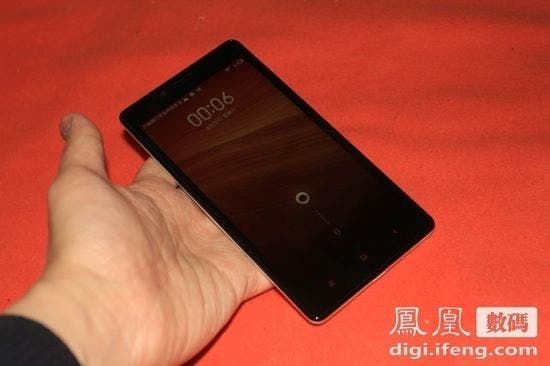 Xiaomi have really attempted to make the Note a fully packed value phone rather than a stylish slender model. This makes for a chunky looking smartphone, but one which has a large battery and a reasonable price tag. 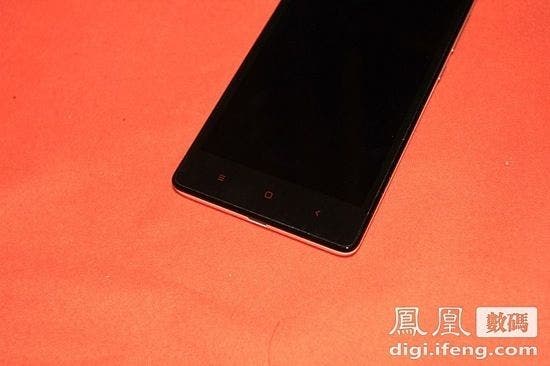 A 5 mega-pixel front facing camera, 5.5-inch 720p display and back-lit chin navigation buttons make up the features on the front of the phone. 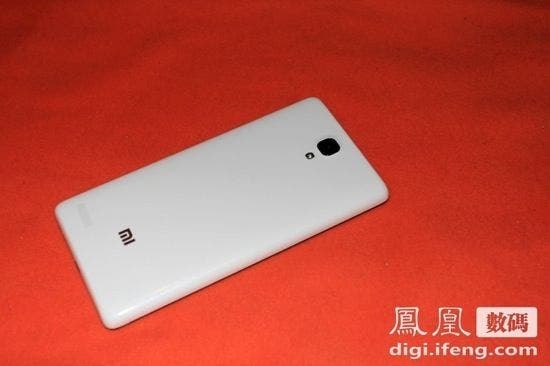 From the rear it would be really hard to tell the Redmi Note from the standard Redmi unless they were side by side. The all white rear (other colours and covers will be available), Xiaomi logo, and even the camera and flash locations are all identical to the 4.7-inch Redmi. The only difference is the external rear speaker location. 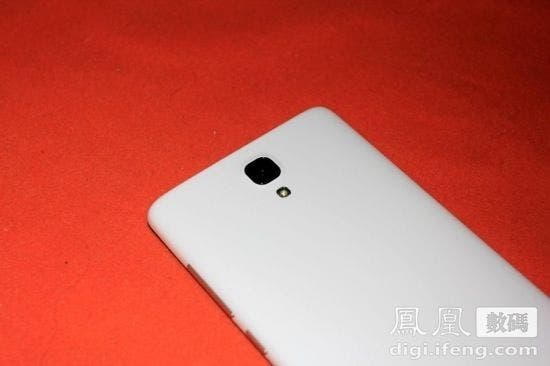 While the design is the same the specs on the rear are not. Gone is the 8 mega-pixel sensor from Samsung, and in comes a 13 mega-pixel rear shooter. 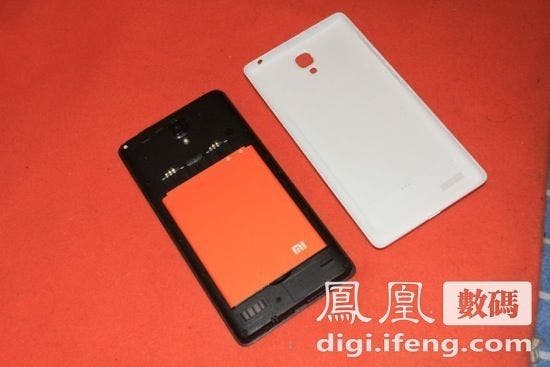 The white rear pulls off to reveal a 3200mAh battery on production phones (this review unit has a 3100mAh battery), dual SIM support and space for a micro SD card. Xiaomi have opted for 2 regular size sim slots for the Redmi Note, and why not there is certainly plenty of room back there. Remember that the Redmi Note will be offered in different versions depending on frequency. For those of you outside of China you will want the WCDMA version. 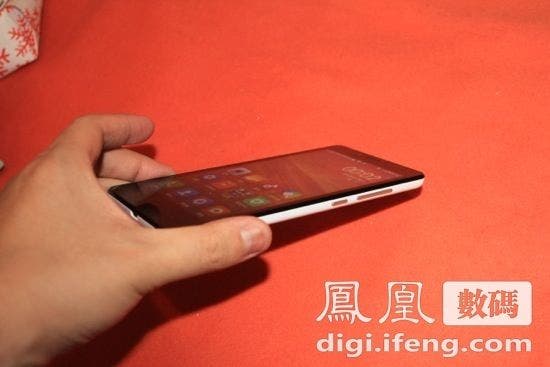 It’s good to see that the power and volume button locations haven’t moved on the Redmi Note, there is nothing more annoying than to go from one model of phone to the next only to have to learn the controls again. 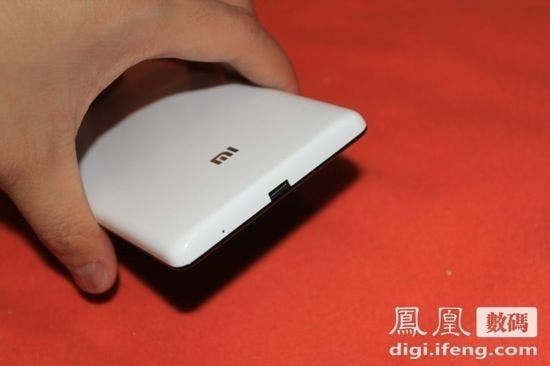 The rest of the body is just as unsurprising with the base being the location for the micro USB and the top having the 3.5mm headphone jack.

The display on the Xioami Redmi Note has the same HD 1280 x 720 resolution as the previous Redmi phone but spread across a much larger surface. With a 5.5-inch display the panel is never going to look as crisp as a 1080 or the newer 2K display, but for the price it is still a great screen. 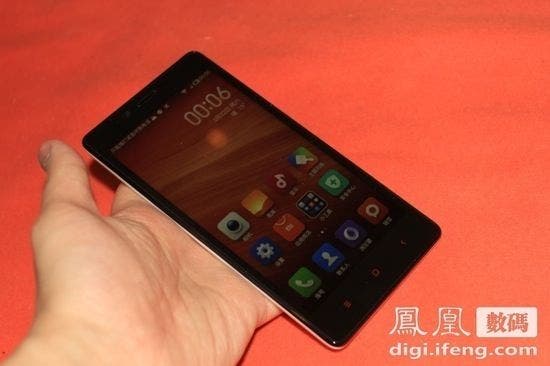 Xiaomi have chosen an IPS panel and reviewers have commented on better touch response and overall better performance and viewing when compared to the oringal Redmi.

This version of the Redmi Note is the range topper with a 1.7Ghz octacore Mediatek MT6592 processor and 2GB RAM. We have already seen plenty of Antutu benchmarks from phones with the same hardware, and the Redmi Note performs just as well. 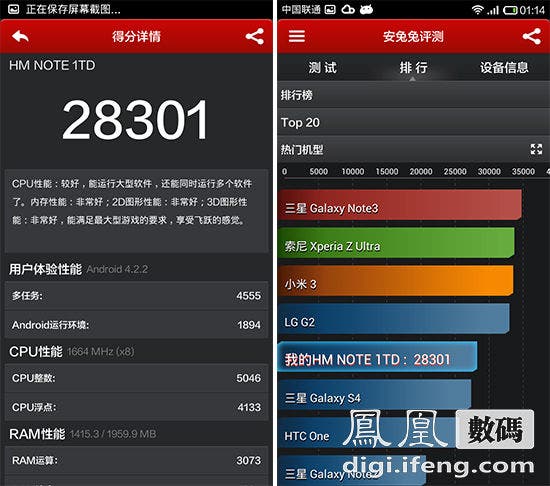 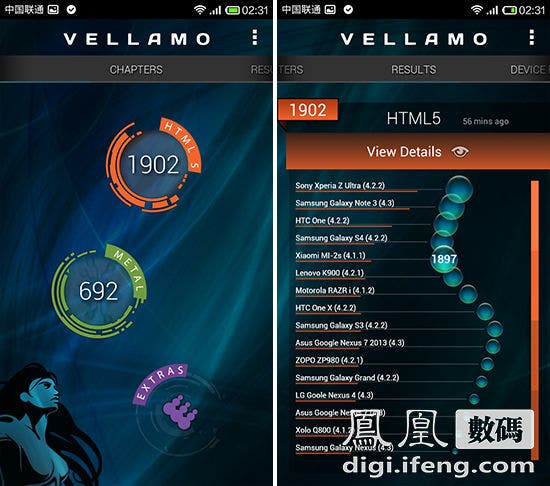 Antutu benchmarks come in at 28,000 points which is very impressive considering the price is just 999 Yuan here in China. Basically the Redmi Note is going to offer you more than enough power for gaming, and everyday use.

The Xiaomi Redmi Note is another amazing value for money phone from Xiaomi. With prices starting from just 799 Yuan there is little else to compete with the octacore processor, 5.5-inch display, large battery and camera performance of the latest Xiaomi phone. 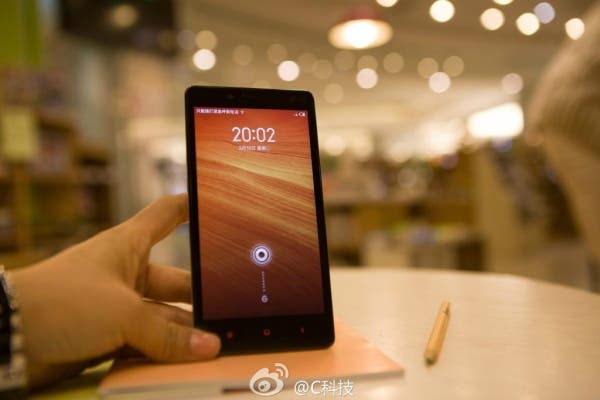 While specifications and performance is well above it’s price would suggest, the Redmi Note isn’t an attractive phone. The original Redmi was a bulky phone, now at 5.5-inch and with a 3200mAh battery the Note is a very chunky phone!

If you want out and out performance on a budget it is hard to knock the Xiaomi Redmi Note, but if design and style are important to you then you might want to look elsewhere.

Xiaomi will launch the Redmi Note in select international market from May, Xiaomi fans in the rest of the world can pre-order the Xiaomi Redmi Note through Xiaomiworld.com.