We had already posted exclusive news details about the THL 5000, now the phone is officially listed on the English THL website.

The THL 5000 is one of the first THL phones to be released that has actually made us stop in our tracks and say ‘WOW’. No the phone isn’t a Snapdragon fire breather, and no it isn’t the most beautiful phone in the world, but it is possibly the best all round phone we have ever seen!

The major selling point of the THL 5000 is it’s 5000mAh battery which will reportedly give the user 1000hours or standby time or 47 hours of continued talk time. But a large battery isn’t the only stand-out feature! 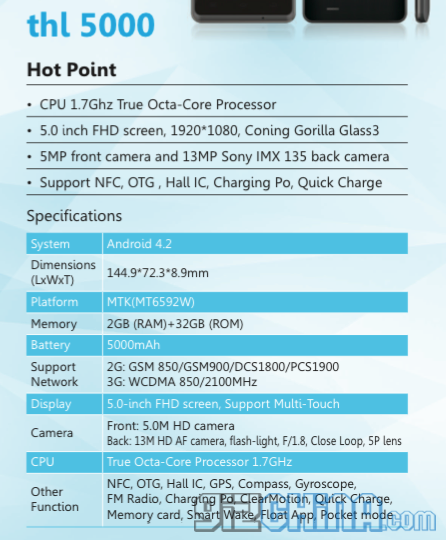 Audio is handled by a professional NXP-box audio amp to boost stereo performance. Then there is NFC support, quick charging, OTG, plus the usual goodies including Bluetooth 4.0, GPS, octacore processor, 2GB RAM and a compass.

THL are currently listing the THL 5000 as available for wholesale ordering, but also list a number of well known resellers on their site who will be offering the THL 5000 once it goes on sale.

Could the THL 5000 be the best all round smartphone for 2014? We certainly think it could.

Next Nubia to announce Nubia X6 Mini on 30th May?