A new generation of Chinese tablet is on the way with power provided by a new Allwinner chipset, capable of propelling the device to over 48,000 points!

The new Onda V989 octacore will come equipped with the latest Allwinner A80T processor. The A80T shares similar big.LITTLE CPU architecture to the Samsung Exynos range allowing the A7 and A15 cores to run when they are needed and not burn through precious battery power. 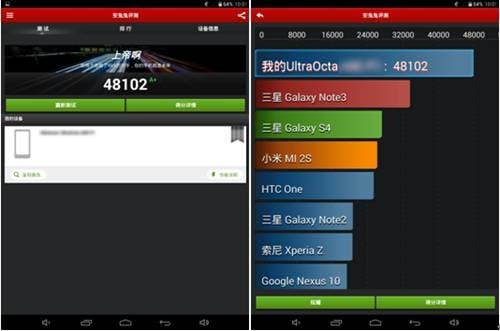 This set up also allows the chipset to divert core power to where it is needed, when it is needed resulting in an amazing Antutu score of 48,102 points! This is aided by a 64bit Power VR G6230 GPU, so expect solid game lay from Onda V989 when it launches.

Chinese Android tablet have always been there on the sidelines, but could new performance advances like this finally see them become more mainstream?

Next Exclusive: Full specs of the Elephone P2000