Since the launch ended yesterday and I got the Meizu MX4 in my hands I have been using this interesting new device non stop. Here are my initial impressions of the new Meizu MX4.

Yesterday we witnessed a big change for Meizu as a company and the way they plan to move forward. In the past Meizu have traditionally been a maker of premium products at a premium price but yesterday we saw that Meizu can also produce high specification smartphones at more competitive pricing and they they are thinking bigger.

Along with the launch of the MX4, CEO Li Nan, also announced partnerships with a number of device makers bringing a low-cost, and attractive, inWatch to customers at a low-price, and mini WIFI router and even a quad-copter drone from manufacturer Ghost. Partnerships like this were unheard of with the old Meizu, but anything is possible now.

Meizu also decided to launch the MX4 pre-order both national and internationally at the same time. Again this is something we just don’t expect from a Chinese phone maker.

Meizu MX4 – A new Meizu from a new Meizu

Although the Meizu MX4 looks similar to the MX3 they are actually totally different products. The launch keynote mentioned a lot of facts and figures conveying just how much more powerful the new MX4 is over the previous MX3. Not only more powerful but thinner, a larger display, a new aircraft grade alloy body, better battery life and an all new Flyme experience.

The phones that Meizu allowed fans to test at the launch and those which were given to the press are pre-production sample models, so we can expect added enhancements and optimizations to Flyme 4.0 and possibly some slight changes to the overall build of the phone for the production model.

The MX4 uses an all new machined aluminium alloy chassis which comes from a single block of aircraft grade aluminium. The whole chassis is machined out of the chunk of material and then sandblasted to give a textured finish. The feel is actually very similar to that of an Apple laptop, and gives the MX4 a solid and lightweight base to build the phone on to.

A removable rear panel is made of plastic and has been finished to make the rear feel the same as the alloy sides. Its a soft to the touch feeling, but not like the ‘baby skin’ option of the OnePlus One. To remove the rear you no longer need a small tool (as the MX3), you simply have a recess where a fingernail can pop in to lever the panel off. In our samples the rear is quite a loose fit, and although we don’t expect it to come off easily by mistake, a tighter fit would be preferred.

Meizu have placed their logo along the bottom of the MX4, it an understated look which will appeal to those of us who don’t wanting branding everywhere. The rear is also home to that 20.7 mega-pixel Sony camera and dual LED set up. 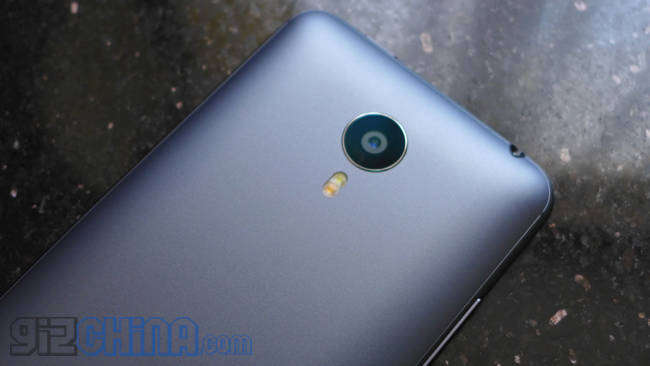 On the inside of the MX4 with the cover off we can see the non removable 3100mAh battery and single SIM slot. MX3 owners will be familiar with this set up. The sample 32GB version we have has no NFC and it would appear that the production version may also lack this feature too. 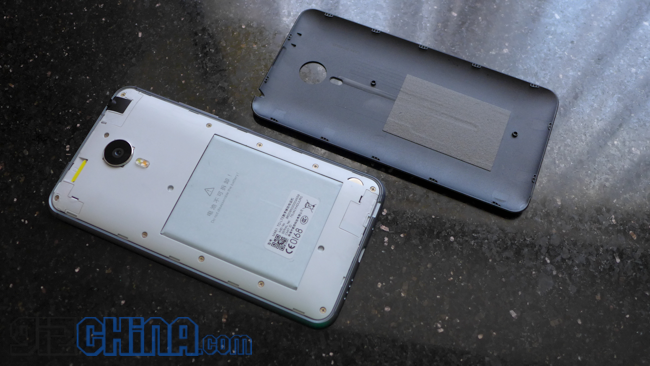 The sides of the phone house the physical buttons in just the same places as the MX3 (so home button at the top and volume rocker on the left). The sandblasted finish is broken in to sections with darker grey bars of colour which I believe are more for decoration than function. As the alloy moves up towards the screen a chamfered edges has been machined in to it and polished to give a nice bright highlight to contrast with the 5.36-inch display.

A Corning Goriilla Glass 3 panel takes up the entire front with a screen ratio of 15:9. So again the Meizu is a little wider but shorter than most other similar size phones, but due the the narrow 2.6mm bezels manages to be a pretty compacted device.

Meizu’s trademark ‘halo’ button is still present on the MX4 and above the FHD display is a front facing 2 mega-pixel camera, speaker and proximity sensor.

All in the Meizu MX4 in black is a very stylish piece of kit. The mix of glass, polished alloy, sandblasted alloy and quality plastic all make for a very understand but purposeful device. Even with the larger 5.3-inch display, the MX4 still manages to feel only slightly larger than the previous Meizu MX3 with 5.1-inch panel, and I barely feel the different between the 5.2-inch Vivo Xshot and the MX4, except where it comes to viewing, then the Meizu wins hands down.

Meizu posted a screenshot or Antutu during the MX4 launch running at an astonishing 42,000 points. impressive for any phone but even more so from a phone running a Mediatek processor. The chipset in the MX4 is the new MT6595 with big.LITTLE architecture and running at 2.2Ghz. The processor along with 2GB RAM and powerful GPU are quite a powerful set up, and as astonishing as it is you feel the speed of this phone as soon as you start to play around with it.

Part of the fast fluid feel is down to the new Flyme 4.0 ROM, but that hardware really comes in to it’s own when gaming. I have been playing Dead Trigger on the MX4 and it is extremely responsive fast and smooth. Gaming is also where the 15:9 screen ratio comes in handy, I feel I’ll be doing a log more gaming now I have a Meizu again.

As impressive as the phone build and hardware it is up to the ROM to transform that in to a great user experience, and Flyme 4.0 has done this. Flyme 4.0 looks cleaner and simpler than 3.0, but some aspects such as the menu layouts etc remain unchanged.

Most of the more impressive features of Flyme 4.0 are aimed at Chinese audiences such as cooperation with local cloud storage companies to offer Flyme users 40 TB of free online storage, or access to movies and music. There is also a SIRI style personal voice assistant, but appears to only support Chinese (at least on our preproduction sample anyway).

Meizu do seem to have listened to fan input though. The notification bar now extends all the way down the screen and each notification can be expanded individually, The weather app has some really nice weather animations.

A new camera app and user interface has been added to Flyme. Swiping from left to right changes the shooting and recording to how you like, and then individual adjustment in each setting allow you to change things further.

While writing this Meizu have actually sent an updated ROM to us so I’ll install this and use the newer rom for the full review.

Meizu MX4 – the other parts

Battery life, GPS and camera will be put through their paces over the next few days so keep an eye out for those updates. I will also upload some comparison videos of the MX4 along some of it’s rival devices soon too.

So far what do you think of the Meizu MX4? could this be a phone you would consider buying? The Meizu MX4 is available for preorder internationally through the official Meizumart.com website.

Next Quad HD on a curved display, Snapdragon 805 and 3GB RAM: Meet the Galaxy Note Edge