MediaTek triggered quite a revolution with the quad-core MT6589 series of chipsets. Xiaomi’s Hongmi is perfect testimony to how the chipset (a higher clocked version of it, actually) turned tables; the Hongmi was made available at ‘just’ $130 which was quite a sensation back then. MediaTek has come out with many new chipsets since then, but is the quad-core MediaTek MT6589T still relevant? To answer that, we tested the THL W200 from last year. Retailing at a little over $100 now, the THL W200 is again another ‘budget’ phone. However, it has a few things going its way when compared to other, newer phones. A beautiful design and sturdy build are a couple of the traits that the W200 displays in general use.

The THL W200 is more than a year old, and comes with the turbo version of MediaTek’s first ever quad-core chip — the MT6589T. The lack of refinement on the chipset shows, but there’s still a lot of worth buying the phone right now, considering that it sells only for $110. However, it would probably be a better idea to get an MT6582 powered phone if you’re looking for performance / stability rather than build and form.
Show
Hide

The THL W200 ships in a plain white box, something similar to what iNew ship their phones in. Here’s what you get in it: 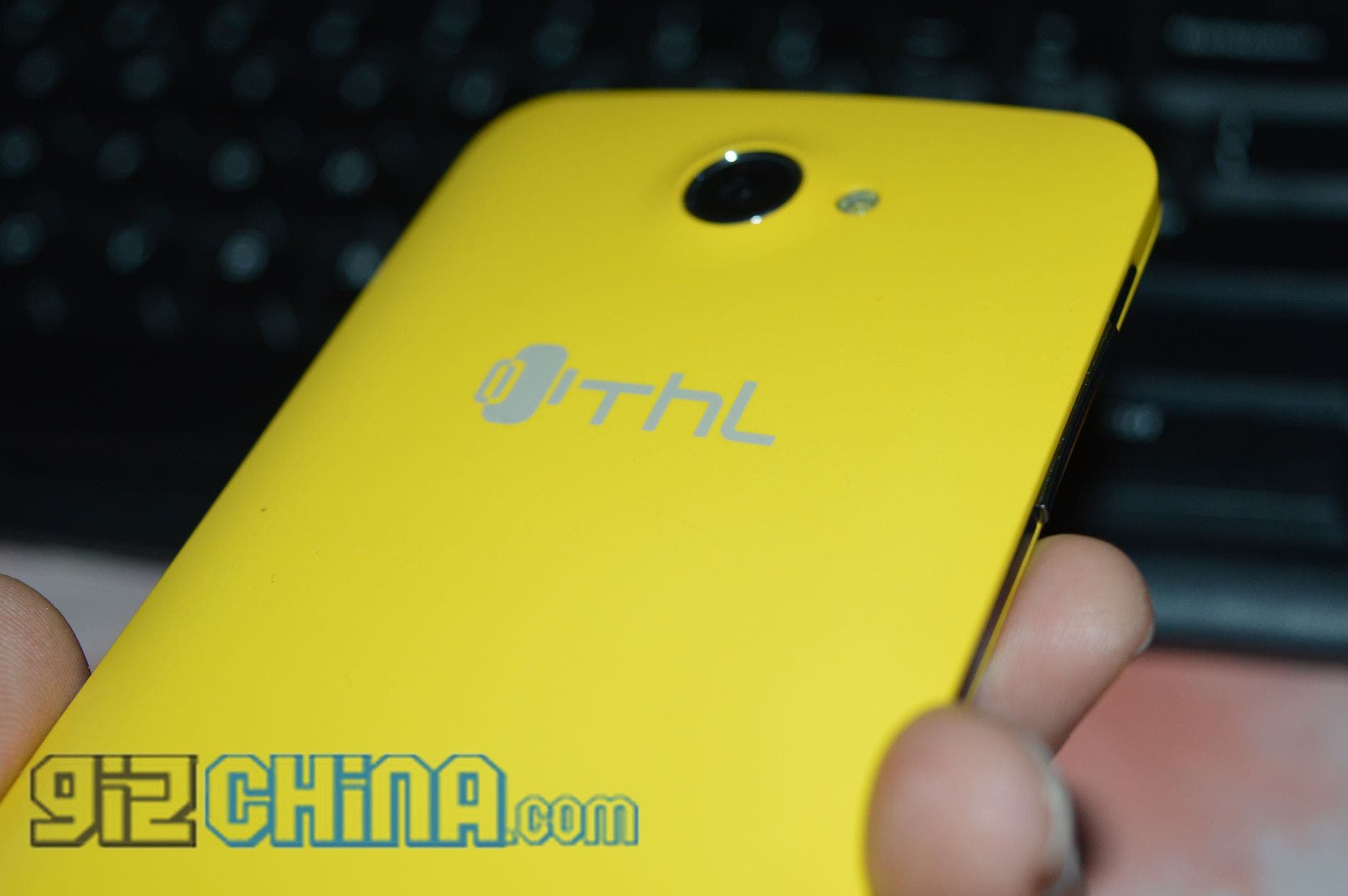 Most phones in or around the $100 range are either blatant clones, or generic, rounded rectanlges. However, the W200 is scores much, much higher on design terms than these other devices. Partly, the reason behind that is the fact that we’re looking at a phone that’s more than a year old, which means it has suffered numerous price cuts, which bring it to the $100 range.

The device feels extremely good in the hand. This is because of its slightly curved back, and the fact that it has reasonably slim bezels. Specifications state that the body of the phone is 8mm thick, and although I didn’t have a Vernier Caliper handy, it did feel like 8-8.5mm more or less. There’s a lot of quality in the phone, at least on the exterior. It certainly doesn’t feel like a $110 phone! The yellow colour also gave the phone an eccentric appeal. I’ve never used any phone which wasn’t black or white, and I never thought I would too. However, the THL W200’s yellow did manage to catch my fancy, but I’m just not sure how long it would be like that.

For build, I’d rate the phone 10/10, considering the price. No squeaky back, no tacky frame… like I mentioned before, it just doesn’t feel like a $110 phone (and to be honest, it isn’t). Take a look at some pictures below. 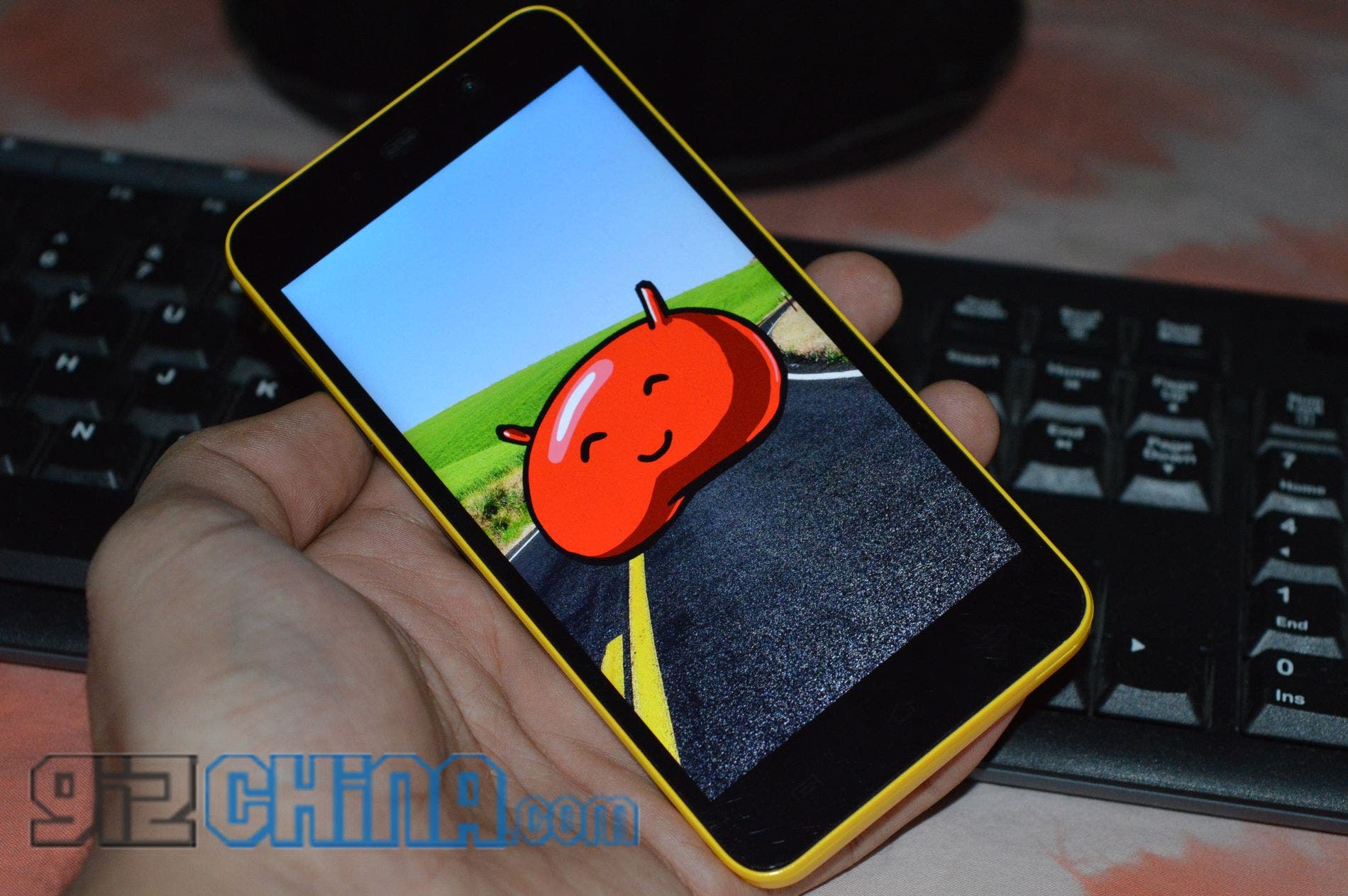 The phone has a 5-inch 720p panel which is pretty beautiful to look at. It is a bit towards the saturated side, akin to AMOLED displays. However, it does have an extremely good picture quality, which reflects the overall hardware quality that THL has fused to make the W200. The screen is fairly bright as well, so readability in direct sunlight isn’t much of a problem either. The 720p resolution does suffice, unless you’re a sucker for not being able to discern between pixels with a microscope in hand.

Besides the sturdy build build and lovely design, the very attractive looking display is the phone’s best feature. In a nutshell, it has great viewing angles, high brightness and a lovely picture quality, almost everything and then more you can expect from a $110 phone.

The general performance of the W200 is up to the standards set by the MediaTek MT6582. General in the sense, transitions between various UI elements, etc. However, once you start firing up apps, it’s a completely different story. There’s a lot of difference between how this phone handles general UI and apps, which is a bit of a shame. When I first took it out of the box, I almost couldn’t fathom why MediaTek chose to make the MT6582. However, I realized once apps on the phone ran pretty slow. It certainly does feel like a 2013 phone and not one from this year.

If you use plan to use your phone for anything more than WhatsApp and WeChat, I’d strongly recommend getting the budget Cubot S168, which actually sells for lesser. The only downside would be the low-ish display resolution.

1GB of RAM is a bit of a bottleneck. 1GB RAM phones run quite a bit better on the MediaTek MT6582 as opposed to the MT6589 or even the MT6589T, as in this case. We’re not sure why that is, but the W200 isn’t the best performing $110 phone out there. Switching from app to app is pretty slow, and that doesn’t add to the multitasking abilities of the phone. If you have more than two tabs open on Chrome, it’s highly likely that the ones in the background get cached. This is just one example of an otherwise poor multitasking system.

The THL W200 packs a decent 8 mega-pixel camera. While many budget phones now have 13 mega-pixel shooters, the W200 is pretty much on par in terms of picture quality. Focus is decently fast as well, which is always a desirable trait. You probably won’t feel the need for a camera with a greater number of pixels if you don’t often put your photos on your computer/TV for viewing.

The app can sometimes be slow, which is sporadic. However, I noticed a trend of sorts here; the camera is usually slow-ish when you move from dark to bright surroundings, or vice versa. The sensor itself it a very able one in bright areas, and doesn’t do too bad in low light conditions as well. HDR is something you could make use of on the phone to get better results.

Again, largely unchanged from stock like a lot of other Chinese phones. What’s good about the W200 is that even the icons aren’t force rounded, like say how they are on the Ecoo Focus. This, in my opinion, looks much better than force rounded icons which can sometimes be a mess.

If you’re into customizations and the likes, you’re probably out of luck with 3rd party ROMs built from scratch. However, rooting the phone is extremely simple, and you can make use of one of the best Xposed modules out there after that — GravityBox — to give your phone a whole new look and feel.

Rooting the W200: To root the device, simply download and install Framaroot, and select ‘install SuperSU’ and bam. To install Xposed modules, you first need to install the Xposed modules framework, which you can easily find with a Google search. 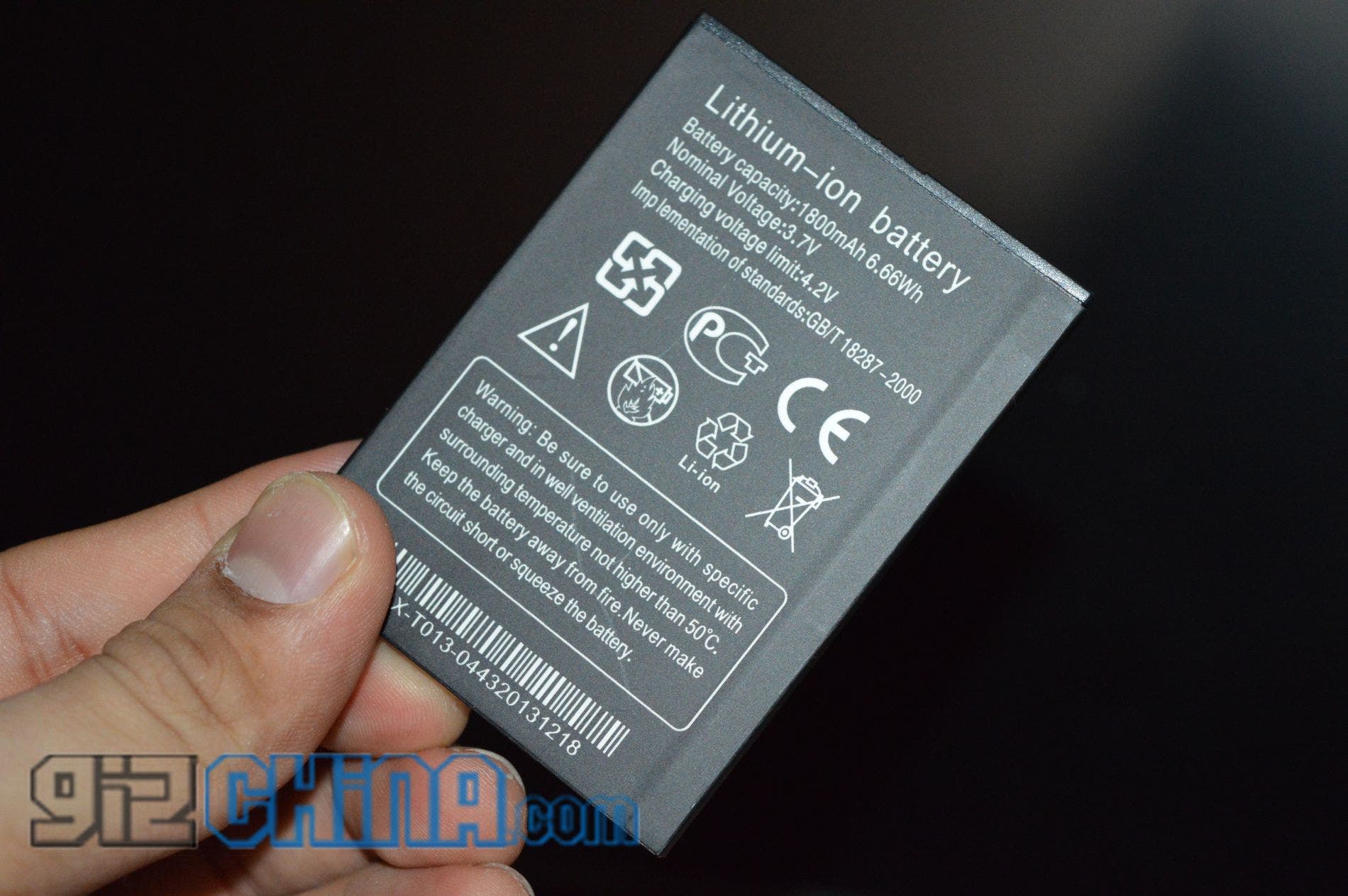 The W200 doesn’t do very well with regards to battery. The MT6589 was MediaTek’s first ever quad-core chip, and the lack of refinement shows. The device doesn’t do more than 3:30-3:50min screen on time, which is a bit of a shame. Most other quad-core MT6582 phones get close to 5 hours of screen on, which is a lot more acceptable. Depending on your style of usage, the W200 may or may not last a day.

Again, there’s a notification LED on the phone which seems to work only when it indicates that the phone is being charged. We’ve encountered this on a lot of Chinese phones this year, and we can’t really fathom why the company would want to have it that way. Also, the device runs Android v4.2 Jelly Bean out of the box, which if not ancient, is certainly old enough now. 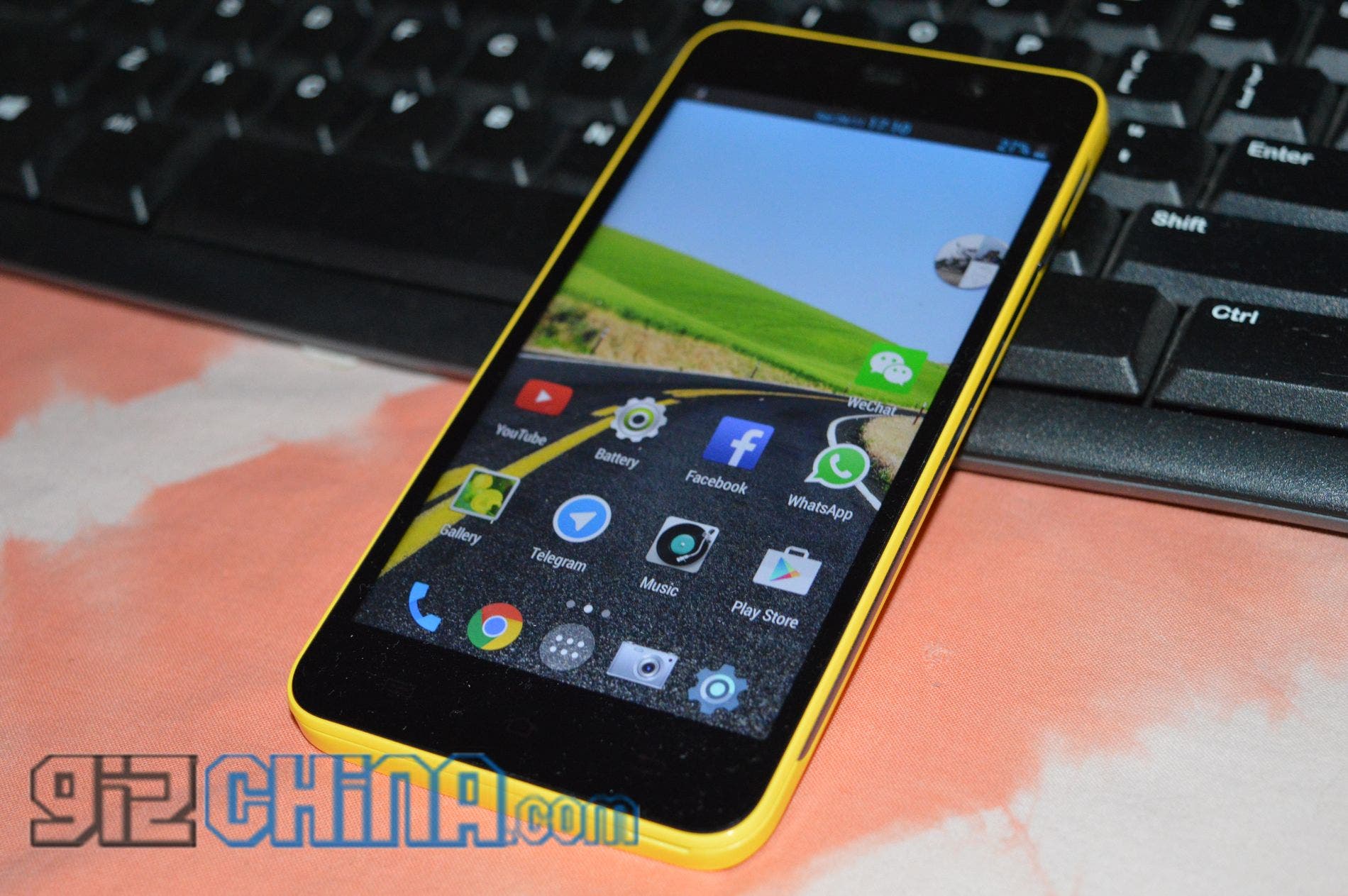 The THL W200 is an extremely well constructed phone on the outside. It comes with a quad-core processor, the older MediaTek MT6589T and 1GB of RAM to make for an entry-level smartphone in this day and age. While the device is sufficiently fast and snappy while you’re playing with its general UI, things start to get messy as more 3rd party apps start showing up. The camera is pretty usable (which goes to show that camera tech hasn’t changed all that much in the last year or so), especially with its decently powerful HDR feature. However, the phone suffers from rather poor multitasking thanks to the ageing processor. While the hardware, on the exterior, is top notch considering the $110 price, you’d probably be better off getting a phone running on the newer MT6582 chip, perhaps something like a Cubot S168.

The phone can be bought from popular e-store, Chinavasion.com who are currently offering the THL W200 for $109.99!

Next Update: OnePlus One will launch in India running CM with Android 5.0 Lollipop update on the way