Chinese phone-makers often are the first to adopt new technologies into their products, but in case of 4G LTE, the not so new anymore standard for fast internet access on-the-go, this hasn’t happened as fast as most of us would’ve liked. Reason for the delay simply is the time Chinese network providers took in order to establish LTE support within their networks. As LTE is available in China for a while now, pretty much all popular brands have come up with a very own LTE capable handset already, and Kingzone is no exception with their N3. Do you remember the Kingzone K1? This handset brought Kingzone from zero to hero thanks to a very attractive pricing, nice build quality and well balanced hardware. Have they been able to repeat the same with the Kingzone N3 and created one more amazing device? Let’s find out! 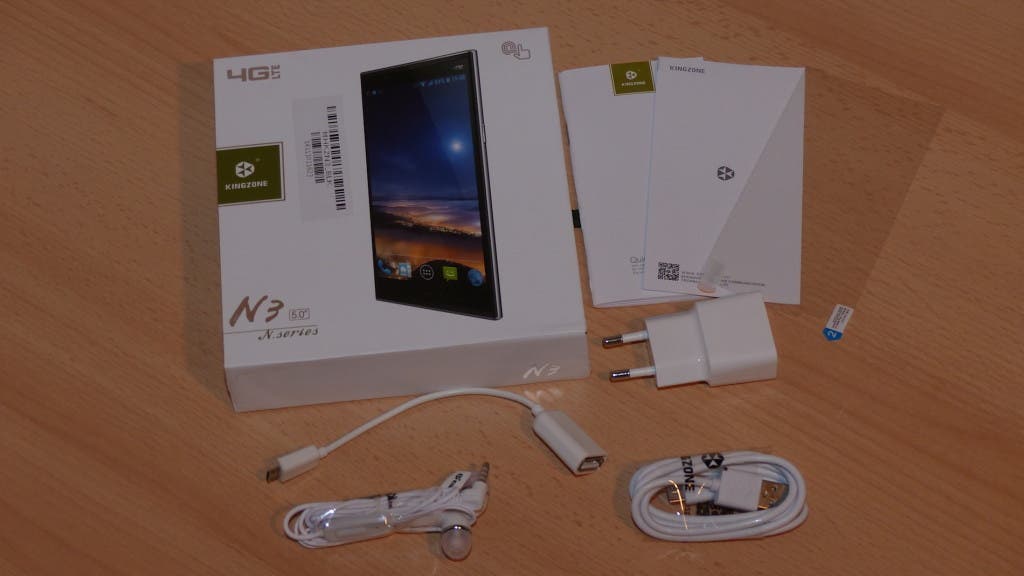 The Kingzone N3 is sharing the same box with the Kingzone K1, only the printing has been adjusted. It comes with plenty of accessories, including a wall charger, a data cable, an OTG cable, headphones, a protective film, a quick start guide and a warranty card. Our sample also included a flip case made from synthetic leather, which can be clipped onto the phone, replacing the standard back cover. It even includes a NFC antenna, so you won’t loose this feature in exchange for additional protection.

The Kingzone N3 itself left a good impression, even though it’s not made from metal. Kingzone once again went for a very unique and stylish design, which definitely stands out from the crowd. It features some very nice design elements like small holes on the upper and lower screen bezels, under which the speaker and microphone for calls are placed. The touch buttons below the screen are backlit with red LEDs, thus providing a nice contrast against the otherwise dark-colored phone. The rear is made from a soft, rubber-like material, providing you with this extra grip needed for safe one-handed operation. The weight of 140g is adding to that high-quality feeling, making up for the missing metal body.

We’ve kinda mixed feelings about the Kingzone N3. On one hand it’s a great looking device with plenty of accessories and lots of features like a fingerprint sensor, a status LED and NFC, but on the other hands the specs seem a bit outdated. The handset features the good old Mediatek MT6582 SoC, which itself is still ok for budget phones, but together with only 1GB of RAM it’s quite a let down, considering the price tag of $177. Only 8GB of internal memory don’t make things better. 4G LTE support and a rather large battery are only partially making up for that.

The phone is currently running Android 4.4.2 KitKat, being mostly a vanilla Android except the launcher, which has been replaced by the same used with the Kingzone K1 before. A neat feature added is the ability to scroll through the launcher, menus and web pages using the fingerprint scammer on the rear. Sadly that’s it with the positives, as the whole operating system feels like a beta version. It’s by far not stable, laggy and tends to crash while playing 3D games, leaving you with the need of removing the battery to reset the phone. The bad performance is of course affecting benchmarks as well, so the scores of this handset are ridiculous compared to similar devices. Anyway, be aware that Kingzone has been notified about these issues, and we’ve already been provided with a beta-firmware, which fixed some of the bugs. A future OTA update will get you rid of those issues for sure.

Being equipped with a 5-inch 720p panel, the Kingzone N3 is living up to the standards other manufacturers have set already for MT6582 phones. The panel Kingzone is using here is a little on the warm side, color-wise, and provides a sharp pictures with decent viewing angles. We didn’t like the maximum brightness level though, which could be a little too low for the sunny days we hopefully will see soon again. One big pro compared to competing phone is the fact that Kingzone did choose to go for Gorilla Glass 3 with the screen, making it survive a meeting with your keys scratch-free. One downside of the surface we notice is, that it’s unfortunately feeling a little sticky, which we don’t like that much. We prefer smooth and slippery screens.

Besides the finger-print scanner and NFC, the Kingzone N3 does offer another feature you won’t find within every budget phone: A Yamaha audio decoder. According to Kingzone, this chip will provide you with a massively improved audio quality, compared to phones using the built-in audio solution provided by Mediatek SoCs. We certainly can confirm this, but only for headphones. The in-built media speaker isn’t the best one and sounds just like most Chinese budget phones.

We’ve put both the 2G /3G and 4G capabilities of the Kingzone N3 to the test. It quickly became clear that the N3 is one of the better performing handsets in terms or reception quality, yet doesn’t quite reach the signal strength of high-end phones like the Meizu MX4 for example. For everyday use it still is perfectly fine and provides you with blazing fast internet access on the go, at least if you are inside a LTE cell. One huge advantage of the N3 over so many other Chinese LTE capable phones is the fact, that Kingzone actually implemented support for LTE 800, which Chinese phones mostly don’t support. During the test of Wi-Fi we noticed the same: Good, but not at high-end level. But in the end it’s working trouble-free as well. NFC has been put to a quick test using the Android Beam feature together with an Oppo Find 7a, which was working fine. As for GPS the phone performs as good as it can with the Mediatek SoC of the previous generation. The antenna appears to be quite good, as you can see at the screenshots below, but you still have to live with the annoying GPS bug in some tracking apps, which sometimes speeds your runs up to 100+km/h. 🙂

Offering a 13 mega pixel rear and 8 mega pixel front-shooter, the Kingzone N3 might sound like a comparably good choice if you are after a handset capable of taking the pictures of your day. Sadly, the camera is quite a let-down in reality. The quality is extremely bad, with a very low depth of field, bad colors and large amount of noises. There’s even more: The camera appears to have huge issues with complicated lighting and night shots. All in all this is nothing you’d like to take serious pictures with. BUT, and that’s a big but, these issues mostly seem to be related to the buggy firmware. The recent beta firmware we have been provided with, significantly improved the camera’s performance, making it totally acceptable. So wait for the update before you judge.

The N3’s battery is replaceable and specified with 2.800mAh. To be honest with you guys, we highly doubt this claim to be true. The size and weight of the cell just don’t fit. We believe the real capacity to be somewhere in between the 2.000 and 2.400mAh range. This still is quite a lot of capacity considering the oldish SoC, and together with Kingzone’s power-saving measures appears to be quite a well-performing combo. We’re using phones rather intensive, and without hours of gaming the battery lasted around 2 full days during our test. This isn’t bad at all.

Kingzone N3 Review: No or Go?

Kingzone once again created a unique product, and the Kingzone N3 impressed us with a high build-quality, lots of accessories and a whole bunch of useful features. The only things we totally dislike are the buggy firmware as well as the 1GB of RAM, which are kind of a no-go at the price level of $170 these days. For now we wouldn’t recommend purchasing the Kingzone N3, but don’t deny that this handset has a lot of potential. Wait for the software bugs to be fixed (which should happen sooner than later) and check the pricing, which eventually should go down anytime soon.
Thanks to eFox-Shop.com for providing us with this review unit.