The Asus Zenfone 2 was one of the big surprises of CES, with an Intel chipset and 2GB RAM and low price it promises killer performance and Antutu scores to some way to prove it.

Antutu scores have been frequently hitting the high 40,000’s since last year, with some devices managing to get a score in the low 50,000 points. There aren’t many phones that can get more than 50,000 in Antutu, but Asus can now join that exclusive group with their Asus Zenfone 2.

Looking over the benchmarks which show an incredible score of 50,401 points, we can see that it is the Intel powered version of the phone that achieved the score. The Intel version, which runs a 2.33Ghz Intel Atom Z3580 chip and 2GB RAM , is only one version of the Zenfone 2 that will go on sale. A Qualcomm Snapdragon 810 and even Mediatek versions of the phone will also launch too. 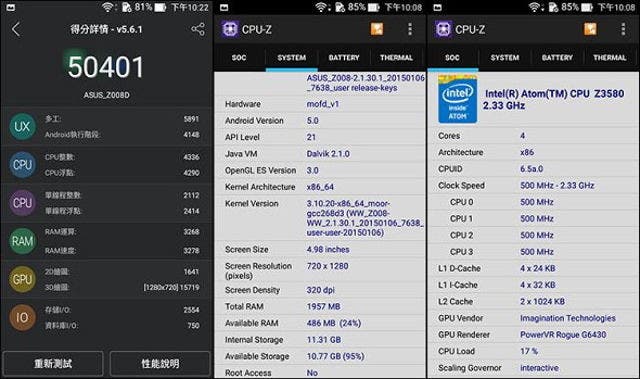 A 50,401 point Antutu score is very good, but as the Zenfone 2 only has to push around the pixels on a 5-inch HD display, it really does have an advantage over 1080 and QHD phones. Still an impressive score none the less.

Next Want a high-end Ubuntu device now? Then why not install Ubuntu Touch on the OnePlus One