Chances are you probably haven’t heard the name ‘Changhong’ before, but the OEM from China seems to be high on confidence regardless of that; the company has launched a new phone which certainly looks overpriced to us.

The Changhong X6 that was just listed in China costs 2699 CNY/US$430, which is rather expensive for a MediaTek MT6595 phone. For reference, the Meizu MX4 with the same SoC was announced for just US$290 in China. 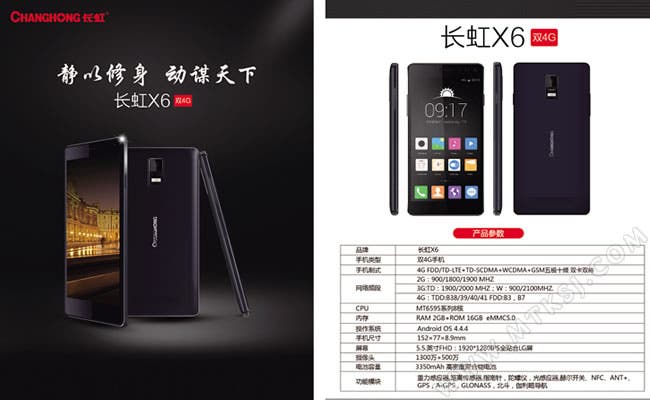 If you can, however, overlook the price, the device has some cool hardware on offer. The MediaTek MT6595 remains to be the mainstay, but other than that, there’s a 5.5-inch 1920 x 1080p display on the device, along with 2GB RAM and 16GB on-board ROM. It also has a 13 mega-pixel rear camera and a 5 mega-pixel front facing camera, all of which are powered by a 3350mAh battery.

If its any consolation, the Changhong X6 also has support for NFC (not that it justifies the price though). It isn’t particularly thin at 152 * 77 * 8.9mm; even if it were thinner than that, chances of it being available on reseller stores would’ve been bleak for people don’t usually spend around US$450 on a phone made by a rather unknown brand with specifications that don’t blow away the mind.

Next Elephone P5000 leaked with a choice of 6 ROM options