Siswoo are a relatively new Chinese brand that European consumers should really have an eye on. The company managed to make headlines several times recently by expanding into Europe in a very professional manner. It all started with a third party operated service center in Spain, which recently got converted into a service center that’s solely serving Siswoo clients. Another service center is scheduled to open later this year in Germany. But it’s not only that, Siswoo actually seem to care about their customers, which is very unusual for new and small brands from China. Recently they did a call-back on the Siswoo R8 Monster which had some issues with the LED flash and Wi-Fi performance. Affected customers have been offered to send their devices to the service center in exchange for a brand new device.

While customer service is amazing for a Chinese phone maker it isn’t the only ace they have up their sleeve. Siswoo also seem to care about the way they design their product line-up. Instead of throwing one device after another onto the market without giving them much thought (yes, we are looking at you Elephone), Siswoo seems to carefully pick specs, looking at which features customers need and which they don’t, thus creating a product line-up that just makes sense.

Now the latest device made by Siswoo that hit us for a review is the Siswoo C50 Longbow. This phone is their entry-level device (so far) for people who want up-to-date 64-bit specs at a low price. The phone managed to impress us in several ways, so let’s get right into the review to learn more about it!

The Siswoo C50 Longbow arrived in a standard phone box with a footprint that is just a bit larger than the device itself. It is designed in a very simple way, using only black and white colors with no pictures of the actual phone. On the rear we spotted a little error on the specs table which claims the handset to boast a 1.5GHz processor while in reality it’s 1.3GHz. Anyway, such mistakes can happen and will probably be sorted out with newer revisions. The package contents are the phone, a screen protector, a wall charger and a USB cable. There also is a nice quick-start guide with some troubleshooting tips inside. 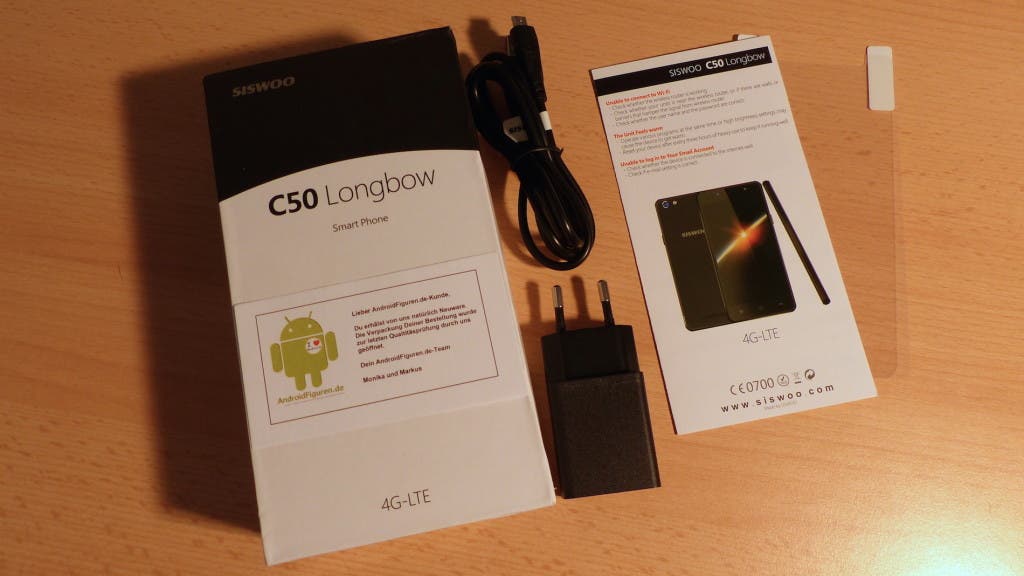 The Siswoo C50 Longbow itself looks pretty impressive considering the low price tag of about $100 in China and €139 in Germany. It left a very positive first impression. Yes, Siswoo used polycarbonate on there, but not the cheap stuff. To cover this fact they paid special attention to the shape of the phone, which really feels amazing in the hand due to a special shape of the frame and a back cover made from a rubberized material that supplies a ton of grip both in your hands and on flat surfaces. The overall build quality is very good and up to a standard that most would be willing to pay more for.

There are some details we would have liked to have seen though which mainly affect the front of the device. First, there is no status LED which might bother some of you, but there is an LED flash for the front camera instead. Second, the touch buttons below the screen are non-illuminated but at least they used a reflective material for the icons so you still can see them with very little light. In 100% darkness it might be hard to find them though in case you didn’t use the phone for a long time yet.

The Siswoo C50 Longbow is a very compact device offering a 5-inch panel with bezels that aren’t too huge, maintaining a certain balance between slimness and usability. It’s a pity that Siswoo don’t tell who is the manufacturer of the screen, since for a 720p panel at this size it is perfect. Amazing contrast, colors brightness – it’s all there, plus can be further enhanced and customized through Mediatek MiraVision. The digitizer is sensitive, precise and fast, too. The glass lets your fingers glide across the screen like a charm, just how it should be. We like!

Specs may not look too good on the Siswoo C50 Longbow since that handset comes with the Mediatek MT6735 SoC. This chipset does offer global LTE support which is a plus, but got a cut-down on the frequency and GPU side with only 1.3GHz clock and the slower Mali T720. Let us tell you though that you likely won’t notice any difference at all, at least if you are not into heavy gaming. High-end games are what this chipset can’t handle at the highest graphic settings, but everything else runs as smooth as on all the other MTK 64-biters.

A lot more reason to worry is the memory capacity, and we mean both RAM and internal storage this time. Since the Siswoo C50 Longbow doesn’t come with more than 1GB of Ram you shouldn’t expect to be able conducting lots of multi-tasking on it. A maximum of 3 background apps is what we experienced to run acceptable on the device. Another problem are the 8GB of internal memory. Due to lots of bloatware that comes pre-installed (nothing Chinese, just stuff like Chrome and CleanMaster), there is only 4GB of free memory available. That’s not much for people who install lots of apps or games on their devices and quickly becomes a big problem since Lollipop doesn’t support App2SD without modifications anymore.

Besides of that we’ve a few more positives to report though. First of all, the C50 Longbow features an infrared blaster, which is another nice addition (like the front LED flash which actually works very well) and even comes with an application to act as a remote control for TVs, TV boxes and air conditioners. Another thing we loved about this phone is – believe it or not – the vibration feature. Why? Simply because it is silent, which is a feature you rarely find on Chinese phones. Usually they rattle quite a bit, but this one just vibrates in a very smooth and non-intrusive way.

And once again the Siswoo C50 Longbow didn’t let us down. The internal media speaker is usually one of the first things we check on a new review sample and we’ve been quite surprised to notice some very nice noises hitting our ears. Offering a well balanced output along mediocre bass playback the C50 Longbow can easily keep up with Xiaomi Redmi devices which are some of the best sounding budget phones out there. The same applies to the headphone output. Even phone call quality managed to impress us with way above average crispness on both ends you wouldn’t expect at sub $150 at all.

The Siswoo C50 Longbow has been with us for two weeks and during that time we never had a single issue with mobile networks or Wi-Fi. It always worked, even in areas where some other devices usually struggle to get a signal. Siswoo really paid attention to use proper antennas in this device and it paid off. Not so amazing is the GPS reception quality, but that is definitely caused by the firmware since the signal strength of satellites is high. The thing we have to complain about is that the GPS looses its fix randomly and also struggles “connecting” with GLONASS satellites. We’ve dropped Siswoo a message about this already and they promised a fix. 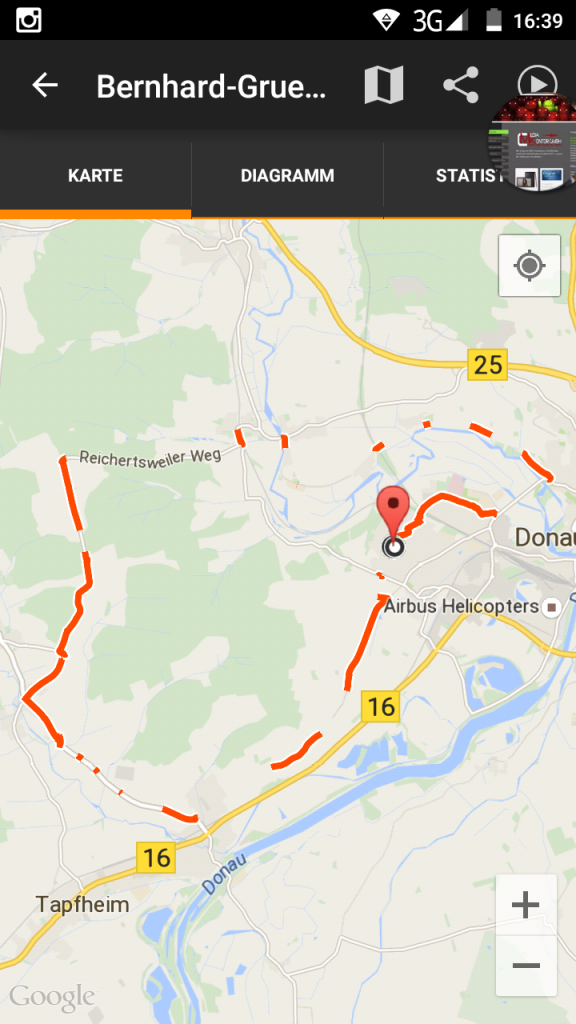 Really, there’s not a good phone without a good camera these days. And yet it doesn’t need to be some fancy high-end camera. It is good enough if it delivers pictures that are good enough to show off. And that’s what the Siswoo C50 Longbow does. It only offers a 8 mega pixel rear shooter and yet the pictures look way better than some of the “wannabe” 13MP cameras out there which especially applies to colors, contrast and shutter time. Some weaknesses of the camera are low-light (the LED flash isn’t of much help) and video recordings. The video quality isn’t perfect and the microphone sensitivity could be better. The front cameras performance is average and its LED flash is a nice touch but not really useful in the end.

Battery life often is a rather negative part when it comes to budget phones. Just look at the Xiaomi Redmi 2. This device offers decent specs at a low price-tag, but considering the energy consumption of the Snapdragon 415 the 2,200mAh battery might be a little too small for some, especially those who use their mobile devices heavily.

Now the Siswoo C50 Longbow tries to be different. It not only features an extremely energy-efficient SoC that outperforms the Snapdragon 415, it also offers quite a bit more battery juice with a 3,000mAh cell. And indeed they don’t play a bad game there, since we verified the capacity to be genuine. This makes up for a truly amazing battery life with a screen-on time of more than 10 hours that will easily drive you through more than a day of usage without the need to re-charge.

The only thing we miss is fast charging which means you will have to accept charging times of about 3 hours. Well, charging at night one definitely can live with that plus you can’t have it all for a low pirce, right?

The Siswoo C50 Longbow is definitely what we consider one of the best budget devices around so far. The specs and build quality just are on a very high level considering the price tag of $100 from China and €139 across Europe. Taking into account the excellent customer service this one surely is worth a closer look in case you are able to live with only 1GB of RAM and the memory limitations and certainly a strong competitor to the Xiaomi Redmi 2. The few software bugs that are still present are just about to be fixed, so we don’t worry too much about them.

That’s it for the review. We hope you enjoyed it and want to say thanks to Androidfiguren.de who have been kind enough to lend us a sample for review. If there are any questions left be sure to drop em into the comments.

Previous New pictures show off the Huawei Honor 7 back!

Next Xiaomi Redmi Note 2 could launch on June 29th