The current 64-bit generation of Mediatek chipsets triggered a real change on the market. Suddenly we see phones that are far more powerful than anything we have seen back last year within the low-cost arena, yet didn’t become more expensive. Ever since then Chinese phone makers try to beat prices of the competition again and again – with success. Elephone is one of those companies and released a device called Elephone G2 for this purpose. Offering a MT6732M SoC, 8GB of memory, Android 5.0 Lollipop plus a wide range of custom ROMs, 8 mega pixel rear camera and a 2,300mAh battery this phone seems very attractive at a price-tag of only $100. Even the less impressive specs like 1GB of RAM and a 4.5-inch screen with 854 x 480 pixels don’t seem like a huge let-down at this price level. But how does that handset perform in everyday’s life? That’s what we’ve been after for a couple weeks.

We’ve had a couple of Elephone for review already and especially the budget ones have one thing in common: The very same packaging. Looking at the picture below might give you a flashback to the P2000 for example. What’s inside? The usual stuff! Phone, USB cable, wall charger. 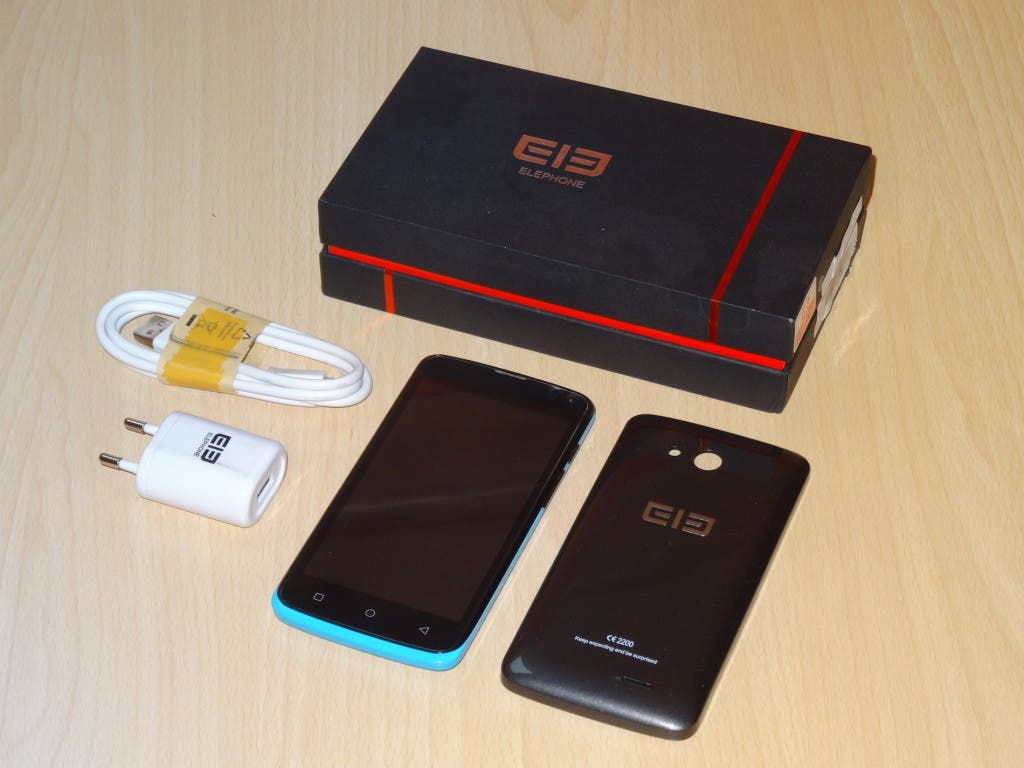 So how does the phone look? Well, it’s colorful, maybe even a tad playful. Doesn’t look all too bad for the low price. Some might go far enough to consider it to have more style than a few more expensive devices from China. Obviously this is a thing of taste, but we haven’t been too disappointed with the looks. Elephone invented a nice design concept there with the front of the device being black and the back-cover (available in various bright colors) appearing partially on the lower area of the devices front. It kinda slips over there, giving that tad of uniqueness to the device. Something they apparently forgot about while doing so is to implement a status LED and back-light for the touch-keys below the screen.

So how’s the build? Well, essentially the phone doesn’t cheap at all and looks solid as well. But upon closer inspection, we noticed dust below the back covers color-coating. It seems like they didn’t coat them in a clean environment. While that isn’t noticeable at the first look, it still leaves a bad aftertaste and you wonder which other dirty secrets may be hidden somewhere inside.

The resolution of the Elephone G2 screen might sound awful to you at first: 854 x 480 pixels! In reality things don’t look too bad though, since the screen is very small at only 4.5-inches and the thrown in IPS and OGS technology makes it look even better. Well, sharpness and viewing angles aren’t much of an issue, the problems arise with other aspects of the panel. We would’ve loved to see a better color reproduction as well as contrast. What’s more, the screen lacks a bit of brightness when sunlight hits the panel. The digitizer isn’t perfect too. It responds fast and precise, but shows lags while scrolling. Not as bad as it used to be with the Elephone P6000, but noticeable. The reason probably is a cheap digitizer and not a software bug.

The MT6732 is a very nice 64-bit quad-core chipset, even with the M version that features a lower CPU and GPU clock as well as no support for GLONASS. It performs very well in pretty much all applications and doesn’t even struggle with current demanding games. A performance killer though are the 1GB of RAM the Elephone G2 does offer. Nowadays 1GB are not enough in case you want to run multiple apps at a time. Throwing more than a single task at once at the device will make it run sluggish immediately due to that. Same happens as well if you don’t re-boot on a regular basis. Also, the time it takes to open applications can reach more than 3 seconds.

The software in its current state (Android 5.0 Lollipop) is pretty good. Initially, we had huge issues with application compatibility and stability but one update that unfortunately had to be flashed manually, fixed most of them (one app still not working is PayPal). Besides of that the OS runs stable and flawless. Some Mediatek-specific features like MiraVision are still missing unfortunately.

As you would expect from a modern 64-bit device, there are no issues at all playing video files with a resolution of up to 1080p. What’s more, audio playback isn’t a problem either with a nice audio output through the headphone jack and no compatibility issues with ear-buds that offer a remote control. The internal speaker isn’t too bad as well (considering the price tag). It offers a decent volume and slight bass playback. Good enough for the non-audiophiles among you in case headphones are out of reach. The audio quality during phone calls didn’t disappoint us as well, on both ends.

Sadly we have to admit that we haven’t been impressed at all! We noticed a significantly lower signal strength for 2G, 3G, 4G and Wi-Fi networks when directly comparing the Elephone G2 to other devices. It sometimes got to the point where the Elephone G2 wasn’t able to get a 3G or 4G signal at all, while other phone remained connected. If you live in an area with generally bad network expansion it isn’t unlikely you will run into issues with this handset, so please be aware of that. Another disappointment was the GPS. The antenna inside the Elephone G2 simply sucks. Getting a fix for more than 7 satellites was impossible with the best accuracy we ever got being 7 meters. That’s not even good for accurate navigation.

8 mega pixels on the rear and 2 mega pixels on the front are what $100 buy you into the Elephone G2. Quality-wise the cameras both haven’t been a huge disappointment but definitely could’ve been better. The sharpness is too low sometimes and the colors look washed out. Besides of that it is a decent snapshot taker and even handles low-light conditions quite nicely. The LED flash doesn’t deserve to be called a flash (as if that would be the first time – lol).

The Elephone G2 is supposed to offer a 2,300mAh battery and going after the weight that appears to be true (formula: 50mAh / g). Still, the battery life is far from being good and the reason for this is Android 5.0 Lollipop. We witnessed the same on other devices: After the update to Lollipop the battery life decreased significantly which is due to bad optimization for the processor. So that might change in the future, but with the current state it is quite a task to get throughout one day with a single charge.

The Elephone G2 was meant to be a small device that combines a low price-tag with almost up-to-date specs. While Elephone managed to deliver exactly that, they unfortunately failed to deliver the small details that make a smartphone good. The mediocre screen quality, the bad reception quality and the short battery life really don’t make the Elephone G2 anything we’d like to use on a daily basis, and due to that we obviously can’t recommend to buy this phone – at least not yet. Let’s see if future firmware updates deliver the improvements this handset needs so badly.

Thanks to Geekvida, German subsidiary of Pandawill, for delivering the review sample to us.