JiaYu have responded to rumours about their demise to confirm that they will continue to trade and will join with partners to become a “New Jiayu”.

JiaYu is one of the older Chinese phone makers. The company started at around the same time as Zopo, but unlike the big Z , have mainly concentrated on the domestic market.

By focussing on Chinese fans it has allowed JiaYu to build a core fan group, but it has also meant slow growth for the brand. Slow growth and low profits are not a recipe for success in the crowded phone market.

Recently there were whispers that JiaYu were in trouble and might close their doors, but those rumours have been quashed today as JiaYu have responded with an official statement.

According to the open letter, JiaYu are restructuring and will see long-term partners Vanzo Communications and Truly Optoelectronics Co. Ltd become part of a larger parent company. The restructure will result in a “New Jiayu” that hopes to offer better quality and the continued development of innovative products. 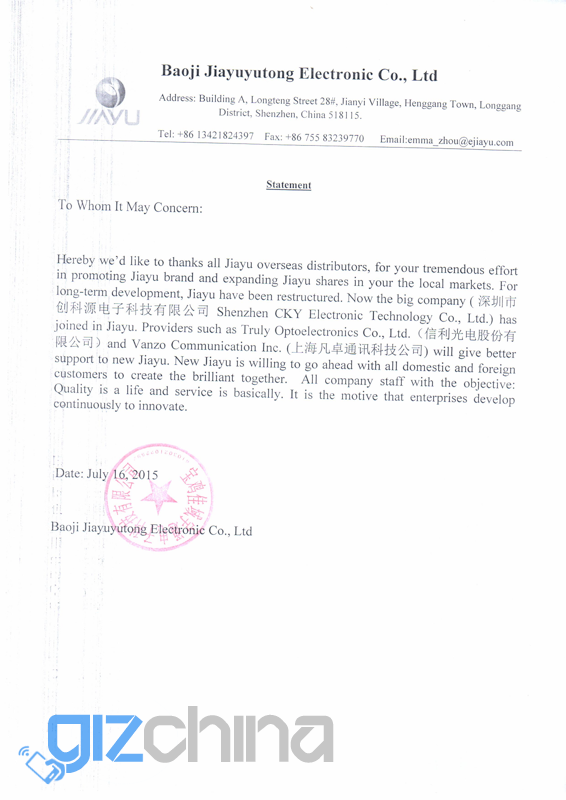 So JiaYu are alive and kicking and seem to have a little more muscle than before, but what remains to be seen is the launch of a new device from the manufacturer to follow up the popular JiaYu S3. Keep tuned for more details.

Next Huawei Honor 7 is coming to European markets indeed

Sponsored: Build Your Business With CUBOT