No doubt in the recent years, the development of ARM microprocessors has taken a great leap on its development, arriving at a performance level that is quite difficult to move forward. Multi-core vs single-core performance, power efficiency, 32-bit vs 64-bit were been some points used by most manufacturers to keep the boat sailing in a bright future.

For a long time Qualcomm has played a big role in the market, with their top tier Snapdragon processors being used by the most part of big OEMs out there. Behind them was MediaTek that started to show some significant growth on the 3 past years after making it big in the entry-level market. However the Taiwanese company has always been a step back of its main competitor, at least until this year.

The new range of processors presented by MediaTek in 2015 put the company in a new level, and the failure of the Snapdragon 810 was a good reason for some companies to start looking for other options. That made the Helio X10, Mediatek top-range processor a big player in this year, being the option for some companies in their flagships and receiving a lot of good reviews of the International media.

Despite the Helio X10 good performance, it lacked a bit of appeal, and for the more exigent, power, to be called a truly flagship processor. For that reason, Mediatek presented their newest Helio X20, that will going to be the best processor by Mediatek until the date.

The Helio X20 deca-core architecture consists of three clusters, being four Cortex A53 cores clocked at 1.4GHz for the simple tasks, four clocked at 2.0GHz for more hardware intensive tasks, and two Cortex A72 cores clocked at whooping 2.5Ghz for when you need all the grunt, all at once.

This week Mediatek has teased on their Twitter page a picture suggesting the capability of taking up 32MP selfies plus fast focus technology on their Helio X20. Until now, we haven’t seen a sensor natively capable of taking 32MP pictures, without the help of software tricks… anyway if in the next year some 32MP sensors pops out, Mediatek wants to make clear that their processor can support it. 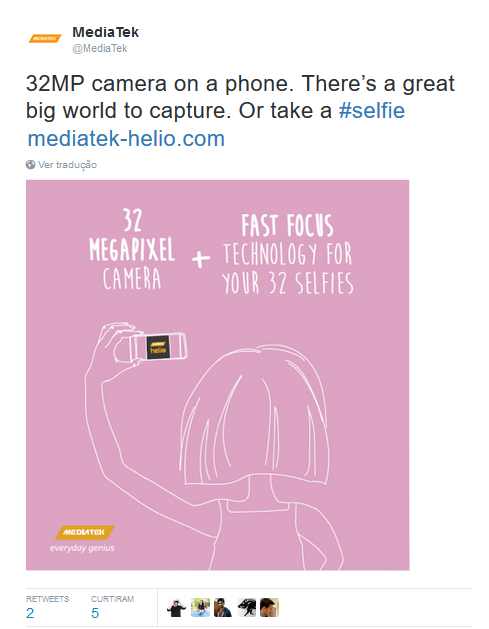 I have to confess that I’m keeping good expectations with their new range of processors as Helio P10 and of course the Helio X20 that should start to show up in some new devices from December 2015 or January 2016. Currently there are few devices that have already been announced to come with Helio X20 as the HTC A9+ and the Acer Predator tablet.

Now what are your expectations for the Helio X20, as well the others processors to be presented by the Taiwanese company in the next year? Doing a retrospective about this year, can we expect something really good in the next? Share your experience and expectations in the comments.

Previous Oukitel U7 Pro specs out; it's still fairly entry-level