Smartphones just don’t wait for their launch dates any longer, and with only 1 day to go the Huawei V8 goes in to the wild and instantly gets spotted.

This year Huawei wowed the world with the P9, a phone with dual camera design that has software optimised by camera specialists Leica. It’s not the first time Huawei have made a dual camera phone (the first was the P6 Plus) and it won’t be the last time as tomorrow the V8 is set to launch with a similar feature.

Judging by the lack of branding on these leaked Huawei V8 photos its unlikely that this phone will have the same Leica tweaks as the P9, but chances are the lens and sensors will be similar meaning some pretty good photos are going to be a possibility. 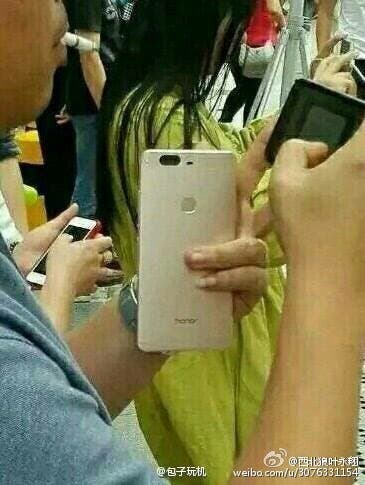 From the images we see that in addition to the dual camera design the Huawei V8 has a dual LED flash and laser autofocus too with a touch fingerprint scanner located in the rear.

Leaks suggest two versions of the phone will be available, a base model with 5.5-inch 1080 screen and 2.3Ghz chipset, and a more up market version with 2.5Ghz processor, and 2K display.

Both phone will get a Kirin 950 chipset, 3400mAh battery dual 12 mega-pixel rear cameras and an 8 mega pixel sensor up front. Pricing is rumoured to be as much as 3499 Yuan in China which equals around $549 USD.

We’ll have more details of the phone once they are revealed at the launch event tomorrow.