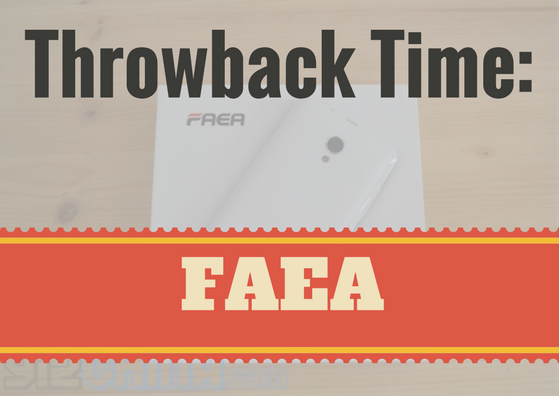 Hey everyone, welcome back to another issue of Throwback Time. Thanks for the feedback from the iOcean Throwback, I really do appreciate everything you guys have to say.

Today’s company is one that many of you may not even be familiar with. This is because This company had a very short life span and only ever released two devices onto the Chinese smartphone market.

Despite their limited life and few devices however, the company managed to make a big enough splash in the Chinese mobile world to make them a well remembered and likable company. Today, we’re taking a look at FAEA.

FAEA: What did they do?

Unlike companies like the previously-covered iOcean, FAEA never really had any sort of presence before they entered the Chinese market. They dived in head first into the the Chinese market in 2013 with only their wits and their first device hoping for the best.

And somehow, they managed to pull it off. They grabbed everyone’s attention with their first device, something many companies fail to do. The device managed to completely change what people came to expect from Chinese budget devices, and it did that quite well.

What was that device you may be asking? Well, that device would be the much loved and remembered FAEA Penguin F1.

Now, before the FAEA Penguin F1 was actually released, most people just saw it as a clone of the Meizu MX, and that was correct to a certain degree. The F1 had all the hallmarks of a 2013 Meizu device.

There was the plastic coating over the back, the halo capacitive button, the port placement, everything pointed at the F1 being a clone device. But when the F1 finally hit the market, everyone’s impressions almost immediately changed.

The FAEA Penguin F1 did almost everything right for a budget device. It managed to hit the sweet spot between price and performance, and for a first device it was quite impressive. It boasted a plethora of features from a HD display to NFC support to even a Snapdragon chipset.

That wasn’t all. The FAEA Penguin F1 also boasted fantastic build quality, and was one of the first budget devices to truly feel much more expensive than it actually was. And getting all that for the measly (measly in 2013) sum of $113? It was a no brainer.

All of this, along with the Meizu inspired design, turned FAEA into a legitimate competitor in the Chinese smartphone market, and they became a company to watch. People eagerly waited for the next FAEA device to hit the market, and that it did.

After the success of the Penguin F1, FAEA figured they needed to make a device that featured a fresher design than the F1 while also incorporating positive traits from their previous device. Enter the FAEA F2, the successor to the F1.

The FAEA F2 was basically the everything the F1 was, and more. Or at least that was what it was supposed to be. You see, the F1 wasn’t a flawless device, but it was very good for the price, and the flaws it had were easily overlooked.

The F2 on the other hand, was a more expensive device meant to compete with other flagships at the time like the UMi X2 and NEO N003. And while the device performed well and had no major issues, it didn’t really do anything better than the rest and had flaws that were tough to overlook.

One of the most crippling problems with the F2 was its build quality. Coming from the well built F1, the F2 was much more fragile and prone to breaking than its predecessor. This, combined with its slow camera and bad gaming performance caused FAEA to lose sales and slowly become less desirable.

Despite all this however, people still liked FAEA, and were looking forward to what the company was going to come out with next. Teasers were released about the FAEA F3 and F4 being waterproof, people were getting excited for the next FAEA devices and the F2 had its sources opened for developers. Things were looking up for FAEA.

Nobody really knows what happened to FAEA. Most people assume that they became bankrupt and left the Chinese market for good. People on the FAEA forums discussed whether FAEA would ever reply to their messages, or whether the F3 and F4 were still being made.

And slowly, everything about FAEA disappeared without a trace. Their website, their forums, their devices, all gone. And while many people don’t know or care for FAEA, those of us who do remember them like to think back to those simple times where something as simple as the F1 managed to please almost everyone.

And, that’s all for today’s Throwback Time. Hope you enjoyed this one, and we’d love to see suggestions for the series in the comments below! Feel free to discuss! Join in next time where we look at a one of my favorite Chinese companies, Newman.