China’s version of Evleaks, ask Kjuma has been hitting social media again this morning with a new leak regarding the upcoming Meizu devices.

A new leak today has revealed that Meizu could launch two versions of the upcoming Meizu M5 Note. The leaks comes from infamous tipster Kjuma in the form of an internal email stating details and pricing for both the Meizu M5 Note and Meizu M5 Note Metal!

According to the email the new models should have been available on the 17th November, and that pricing will start at 999 Yuan rising to just 1099 Yuan.

We don’t get the full hardware parameters for each phone form the email but we do learn that the more affordable model will be the Meizu M5 Note with 2GB RAM and 16GB internal memory. 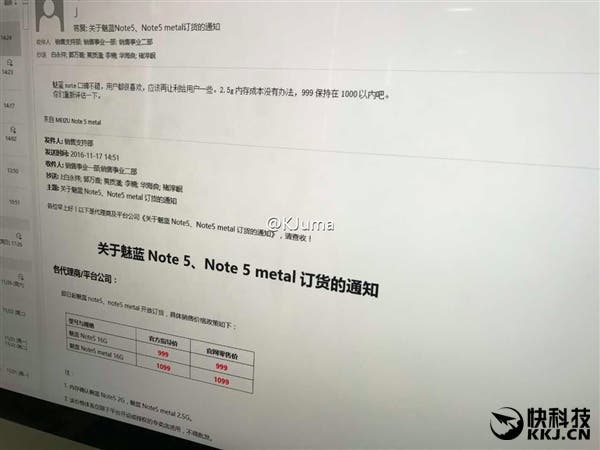 For an extra 100 Yuan customers will be able to get the Meizu M5 Note Metal (suggesting the regular M5 Note isn’t metal) which is oddly listed at 2.5GB RAM! As far as we can tell this would be the first phone to be launched with 2.5GB RAM on the market.

While the odd amount of RAM is an interesting idea, we wonder if the value of the Meizu M series will take a pounding if these details are accurate? A plastic body M5 Note with 2GB RAM sounds a little low-end compared to rivals of a similar cost, and then again why would anyone buy it when a metal bodied version with slightly more RAM is only 100 Yuan more?

Next Lenovo brings the A6600 Plus to Malaysia