As expected, Huawei unveiled the ‘Magic’ smartphone earlier today, at an event in China. There’s quite a bit of magic going on in the Magic, keep reading.

Known as the Huawei Honor Magic, the phone uses AI algorithms to predict and realise what the user is most likely to do. For instance, the phone realises when it’s in the hands, and in that case, doesn’t ring but only vibrates when there’s a call. 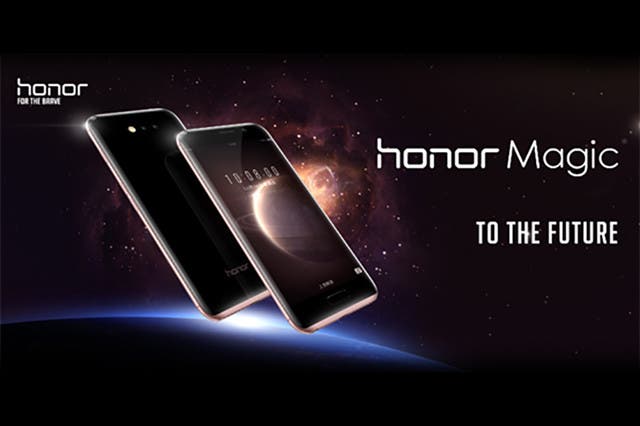 On the spec side of things, the Honor Magic is pretty power-packed; it comes with a 5-inch 2560 x 1440p display, making it a phone with a really high pixel density. Like the ZUK Z2 and some Meizu phones, the home button on the Honor Magic isn’t just a home button. It also doubles up as a fingerprint scanner and navigational aid.

The Magic is powered by the Kirin 950 SoC and along with that, has 4GB of RAM and 64GB of ROM. A 12 mega-pixel dual-lens sensor (borrowed from the Honor 8) is combined with an 8 mega-pixel sensor on the front… All this is powered by a 2900mAh non-removable battery.

Another highlight of the phone, and perhaps something that you’ll notice is the design — it’s a phone that’s curved on all eight edges, as opposed to two or four. Not quite sure how this will enhance usability, but of course Huawei claim it makes the device a lot more ergonomic.

All that said, it’s the ‘Honor Magic Live’ — a proprietary operating system — which happens to be the highlight of the phone. It serves contextual recommendations (Google Now-style), and provides interactions that make the phone a lot more easy to use (than a standard vanilla OS).