The evolution of the Xiaomi Mi Mix Concept smartphone has been sighted on benchmarks this morning boasting flagship hardware.

Back in October, Xiaomi announced the Mi Mix and since then the tech world hasn’t been able to stop chattering about it. The Mi Mix broke new ground for Xiaomi, and the smartphone world as a whole, due to the idea of this phone being a concept device that customers can actually buy.

It turns out that the Mi Mix isn’t quite as great as the design and fanfare made it out to be (read our Xiaomi Mi Mix review here) but that hasn’t dampened expectations of what a follow up might be like.

So with the Mi Mix doing the groundwork, what Xiaomi now needs is a phone that can really capitalise on the hype. Perhaps a slightly updated Mi Mix with the bugs ironed out and a faster chipset? 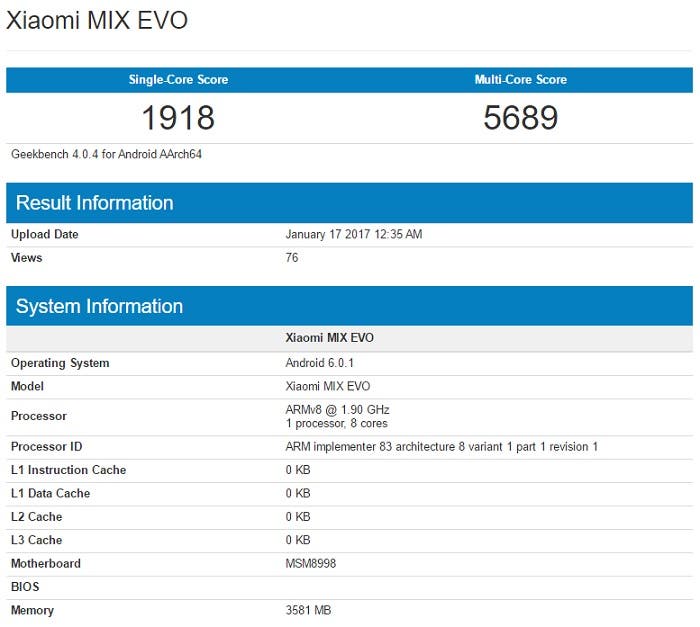 The Xiaomi Mi Mix Evo looks to be that phone with Geekbench benchmarks today showing the the new phone will feature a more powerful Snapdragon 835 chipset and from 4GB RAM.

It’s likely that the Mi Mix Evo will be visually identical to the current Mi Mix, but could also see improvements to the camera and perhaps a slight update to the material choice for more durability.

Xiaomi are expected to release more details of the Mi Mix Evo ahead of an official launch at MWX this year.

Next Nougat update for Samsung S7/S7 Edge halted in China