Strategy Analytics, the same people who bring us global shipment news every quarter, have now revealed that Apple has had the most wearable shipments worldwide in Q1 of 2017. Not only does that mean they’re now number one in the market, but they also managed to beat out Xiaomi and Fitbit for that spot.

Following close behind them is Xiaomi, with a total of 3.4 million units shipped in Q1 2017. Although they’re only 0.1 million units behind Apple, they also suffered a 10.5% decline in units shipped compared to Q1 of last year where they shipped 3.9 million units worldwide. It’s also worth noting that Xiaomi’s wearables are cheaper, which results in small profits.

Fitbit however has seen the largest fall from grace going from the first spot last year to the third spot, with a huge decline in shipped units. While last year they shipped a good 4.5 million units, they’ve only pushed out 2.9 million units in Q1 of 2017, a 36% decline from last year. 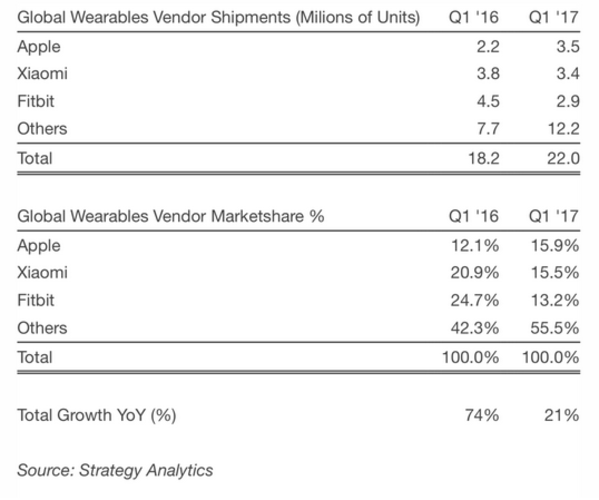 Previous UMIDIGI Crystal might have a Snapdragon 835, 6GB+128GB version