A few days ago, a User Agent popped information about a Samsung device with model number SM-G892A, believed to be the Samsung Galaxy S8 Active, exclusive to AT&T. No surprise in that since all the “Active” Galaxy smartphones have been exclusive to AT&T. The most recent listing on the WiFi Alliance(WFA) confirmas that the device has received WiFi certification.

The WiFi certification shows the model number SM-G892A, same as the earlier leaked model number.  The listing does not reveal much about the handset except that it will be running Android Nougat 7.0 out of the box. It will have dual band WiFi, same as the one in the original S8. 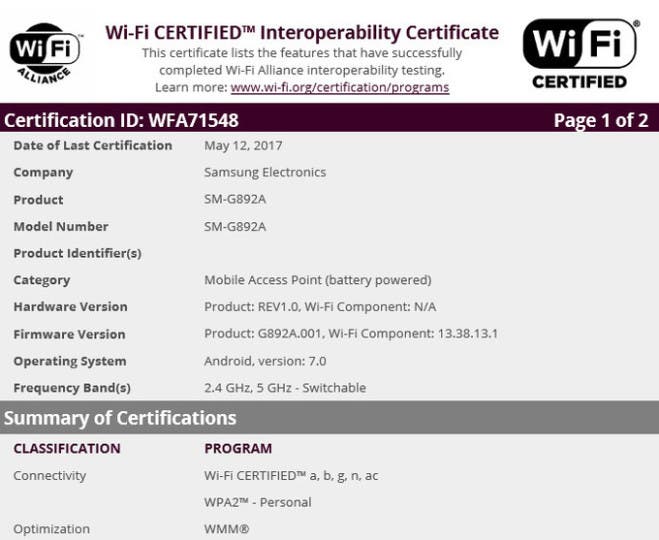 From what the rumors say, the  Samsung Galaxy S8 Active will be MIL-STD-810G standard compliant, meaning, extreme durability. Surviving huge drops, water, fire and dust damage will be a cakewalk. It will also have the IP68 certification like its siblings, the Galaxy S8/S8+.

On the spec front, it’ll will have close to same specs as the Galaxy S8, with Snapdragon 835 SoC under the hood coupled with 4GB of RAM and 64GB of ROM. It will house the same 12MP f/1.7, with PDAF and OIS on the rear and a 5MP shooter in the front. The display might be a 5.8 inch Super AMOLED screen with a 1440 x 2960 resolution.

The  design might see some changes from the original Galaxy S8 since it needs to be extremely durable. There might be thicker bezels or even a stronger grade of glass. Watch this space for more!