The Huawei Honor 9 is slated for release on the 12th of June at the Shanghai Oriental Sports Center. There have been leaks and rumors pouring from all sides of the internet. The latest leak comes from a user on Weibo, which states that the Huawei Honor 9 will feature a glass body with a metal frame. 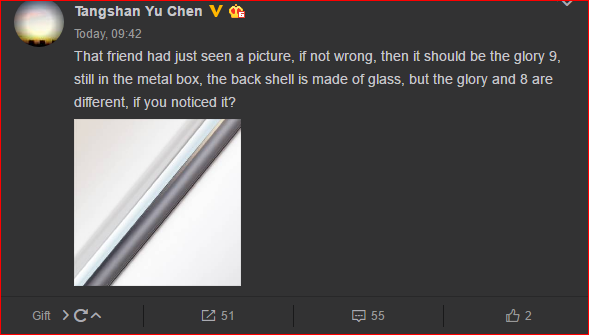 According to the listing on TENAA, the Huawei Honor 9 is supposed to sport the Kirin 960 chipset, clocked at 2.4GHz. The phone is speculated to be available in two variants, 4GB+64GB and 6GB+64GB. The camera setup on the rear is a combo of a 20MP and a 12MP sensor with laser autofocus and dual tone LED flash. The front has an 8MP shooter. The battery on the Honor 9 might be 3,100mAh.

The screen is speculated to be a 5.15 inch panel with 1080p resolution. There is no word as to whether these specs are the final specs or not. The front might feature a 2.5D curved glass on top whereas the back might have a curvier 3D glass design.

These are all but rumors. We can only wait and watch what Huawei has in store for us on the 12th of June where the phone is supposed to be unveiled along with a new smart band. Stay tuned for more!

Previous The Nubia Z17 is here, with a lot of RAM

Next Xiaomi Redmi 5 in photos?