Well this looks interesting, especially if it comes from the company I guess. Mediatek has already began to promote its Helio X30 chipset, mentioning some of its key features to social media. 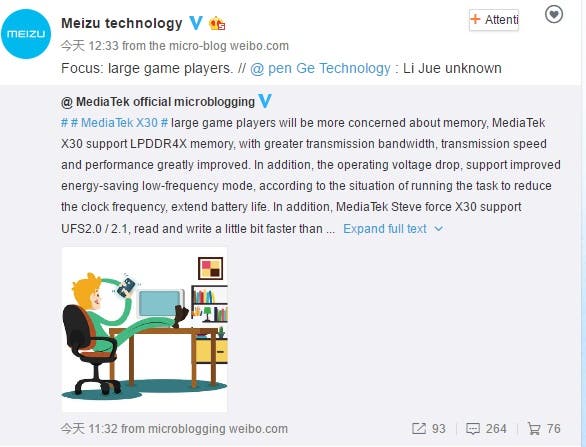 A recent post that appeared on Mediatek’s official Weibo account highlights one of the main features of their powerful chipset, which is mobile gaming. According to the manufacturer their flagship SoC supports LPDDR4X RAM, which allows the use of memories with higher clock frequencies and with better power efficiency.

This new memory standard has a 40% voltage reduction (1.1V to 0.6V) allowing data to be sent and received at improved speeds but without draining much power. According to its official specs, the Helio X30 also supports UFS 2.0 and UFS 2.1 storage formats and devices that have this type of storage have faster read and write speeds compared to eMMC.

In case you missed its official unveiling several months ago, the Helio X30 is a 10nm deca-core chip clocked at 2.5GHz, with dual camera support and comes with the brand new PowerVR 7XTP-MT4 GPU for intense graphics performance.

We expect the Meizu Pro 7 to be the first phone in the world to support this specific SoC.