Chinese manufacturing giant, Xiaomi, has been successful in the production and marketing of its product this year. Within a short period, the company unveiled a lot of smartphones which include Xiaomi Mi 6, Xiaomi Mi MIX 2 and Xiaomi Mi Note 3 all of which are doing well in the market. This young Chinese company shipped about 23.16 million units of smartphones in the second quarter of this year which is a new record and within last month (September), it shipped 10 million smartphones. 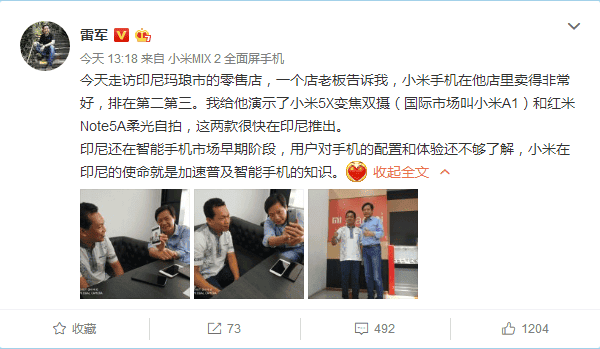 Enjoying so much success at the moment, Xiaomi aims to expand its foreign sales by penetrating the Indonesian market which Xiaomi CEO, Lei Jun, described as a young smartphone market. In the just concluded Xiaomi authorized shop opening ceremony in Indonesia, Lei Jun visited a retail store in Malang and stated that Indonesian smartphone market will receive Xiaomi Mi 5X and Xiaomi Redmi Note 5A. However, he did not say the exact time that this would happen.

India already has Xiaomi Mi A1 which replicates Xiaomi Mi 5X. It comes with the tag “created by Xiaomi, powered by Google.” This phone runs on Google’s Android OS which was designed as part of Google’s Android One program. It is not clear if Xiaomi will use the same device for Indonesia.

Next Huawei Mate 10 Pro Images: What Do You Think?