First introduced earlier in September in China as the Big Gold Steel 2, the Gionee M7 power would be coming to India in a couple of days. Gionee had earlier teased the m7 power earlier in the week and has now officially confirmed by means of official media invites for the launch of the m7 power in India on November 15th.

A sample of the invites seen below leaves no one in doubt that the Company intends to launch the M7 power in the country on November 15th.

We already know every detail about the Gionee M7 power, what remains unknown is the expected retail price in the India market, but it is speculated to launch at Rs 19,999. One of the highlights of the device is its 85% screen-to-body ratio, the device packs a large 6.0-inch HD+ FullView Display with a screen resolution of 1440 x 720 pixels. The device also features a capable 5000mAh battery with fast charging, while a Qualcomm Snapdragon 435 processor with Adreno 505 GPU is in charge of the device’s processing needs. 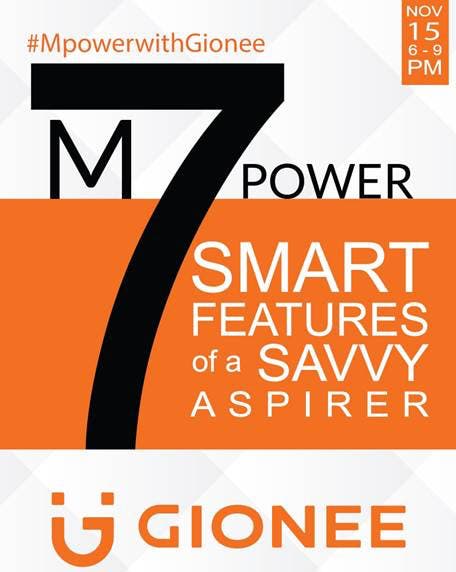 Elsewhere, purported live images of what is believed to be yet another variant of the m7 family appeared online recently. The device is yet to be officially unveiled anywhere, so it could be part of the device that will be unveiled on November  15th in India.

The Gionee M7 plus as it is called, the upcoming device is expected to come with a huge display as well as a high screen to body ratio. The screen is rumored to be a very large 6.43 inches with the industry’s hottest 18: 9 full-screen design, and that suggests that the smartphone would sport a back side fingerprint scanner.