The Galaxy S9 is Samsung’s next flagship smartphone, and without doubts could be its greatest phone ever. The device is rumored to come with the very latest hardware under its hood, and thanks to one of the many recent leaks, it appears the device will be ready for official unveiling at MWC 2018 as it is already set for mass production in early December.

Reports have it that Samsung has already reserved the first batch of the unannounced Snapdragon 845 to be used on some variants of the Galaxy S9, while another variant will utilize Exynos 9 Series 9810 octa-core processor, and today, a benchmark has just confirmed that.

The GeekBench listing of a device with model number SM-G960F which is heavily rumored to be Galaxy S9, first reported by Xiaomitoday, has revealed that the smartphone will run Android 8.0 Oreo and will be powered by an octa-core Exynos 9 Series 9810 chipset in some markets, while others will get the latest Snapdragon processor. 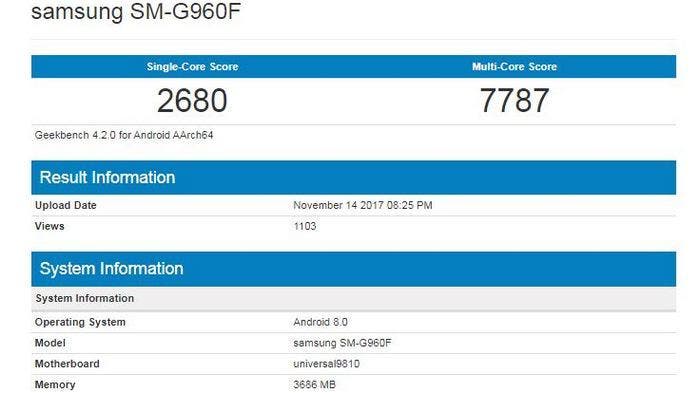 To recall, recently leaked specifications of the upcoming Galaxy S9 suggest that the device could adopt 3D sensing cameras for facial recognition similar to the Face ID on the iPhone X, while a dual-camera setup with “ anti-glare BBAR layer ghost technology” will be at its rear.

Next Save the Most from BESTEK in 2017 This Black Friday!