Earlier in the week, an unannounced smartphone from Samsung was spotted at the United States of America’s official certification authority, the FCC, where some of its basic specs were revealed.  Now, the latest leak available to us via Slashleaks shield more light on the hardware of the device that is widely believed to be the Galaxy J5 prime(2017).

The latest leaked specs sheet of the device, in contrast to the one revealed by FCC point towards the Galaxy J5 prime (2017) packing a 5.0-inch HD display. The will come with an aspect ratio of 18:9, so it could have a nearly bezel-less display, but will retain a front fingerprint sensor below the display.

The leaked specs sheet further revealed that the device will use homemade Exynos 7570 chipset with1.4 GHz quad-core processor and ARM Mali-T720 graphics.The device will come only in 3GB RAM option, while the leaked sheet has the storage size as 16, in contrast to the 32GB revealed by FCC.

Other leaked specs including a non-removable 2500mAh battery, 12-megapixel and 8-megapixel rear and front camera, Android 7.1.1 Nougat further cement those from FCC and Benchmark listing.will have 142.7mm of height and 69.6mm of width. Its connectivity options will include Bluetooth 4.2 Low-energy (LE), Wi-Fi 802.11 b/g/n, and 4G LTE. 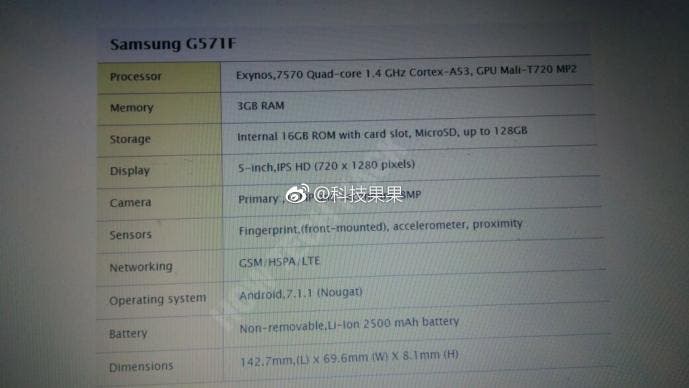 Next Xiaomi phones flash sales from the Lightinthebox e-shop