The successor to last year’s Galaxy J5 Prime (2016) seems to have made an impromptu appearance on GFXBench earlier today revealing most of its technical specifications. The new device will probably be called (duh) Galaxy J5 Prime 2017, and it comes with a model number of SM-G571. 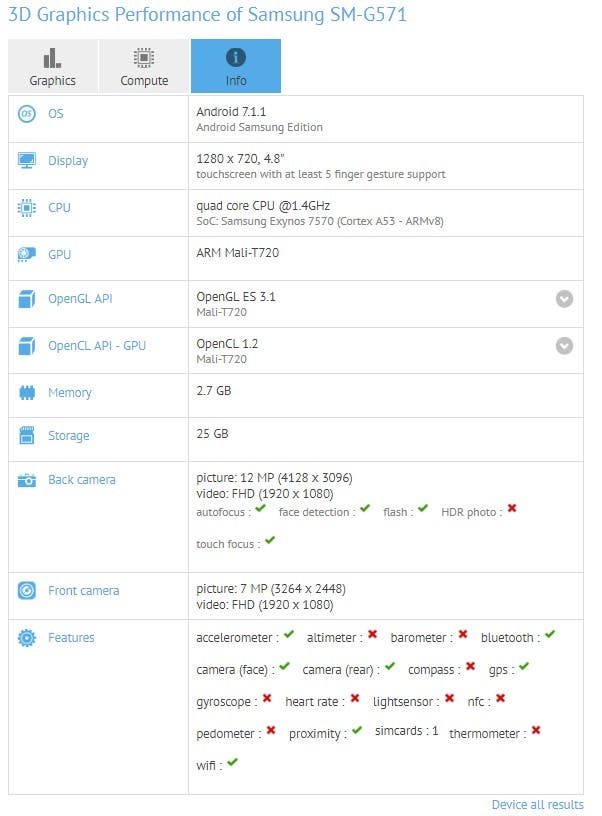 Its GFXBench listing reveals several of its -typical however- specs as you can see for yourselves. The new budget Galaxy is expected to pack a 4.8-inch display with an HD resolution of 720 x 1280 pixels, along with an Exynos 7570 chipset inside, equipped with a 1.4 GHz quad-core processor and 3 GB of RAM.

The inbuilt storage of the alleged Galaxy J5 Prime 2017 is 32 GB but it will surely have a microSD slot (for expandable storage). It’s expected to pack a 13MP main camera, along with an 8-megapixel selfie snapper. Both the cameras carry support for full HD video shooting.

Obviously we have no info yet on when this new Galaxy J Series will be unveiled but it should have been announced by now – its predecessor was announced on September 2016, so this new model is already a bit late 😉

Next Honor 6A Pro hits European markets, with 3GB RAM and affordable price