Just yesterday we’ve been talking about an alleged Samsung Galaxy S9 front panel leak, in that circumstance the few differences between the leak and the current S8 and S8+ screens made us doubt if that was in fact the upcoming Samsung flagship. Today a new leak reveals what is in fact both Galaxy S9 and S9 Plus front panels, the displays itself are very familiar to those found in their predecessors, however the bottom bezels seems a little more slim than the ones found in the Galaxy S8 pair.

Previous rumors pointed that the Galaxy S9 would arrive with a 90% screen-to-body in counterpart to the 84% achieved by the Galaxy S8. However judging by the similarities between the alleged front panel and the Galaxy S8 front panel, we think that the numbers will be slightly more modest than before rumored. 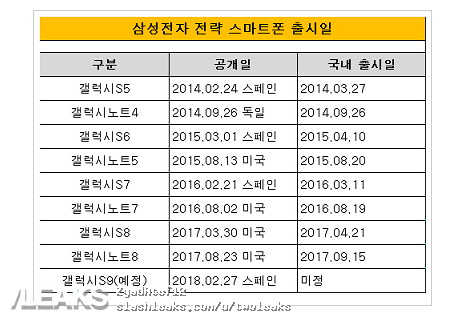 The rumors points out for a launch during MWC 2018 that happens by the end of February. A alleged document lists all the Samsung flagships launch since the Galaxy S5 and according to the listing, the Galaxy S9 and S9 Plus will see the light of day on February 27, 2018.

The Galaxy S9 and S9+ will not only focus in the Infinite Display front but also may bring a redesigned back, with a vertically placed fingerprint sensor after all the controversies towards the placement chosen for Galaxy S8. The Galaxy S9 may also be the very first smartphone to sport the newest Snapdragon 845.

Earlier today we’ve got plenty of 3D renders and 360-video coming from the alleged device, with the curtains of 2017 ready to close and the 2018’s season of smartphones launches the Galaxy S9 leaks may become more constantly, and we’ll be there to bring you all the details of the newest king of the South-Korean giant.