Next year at MWC Sony will introduce its full-screen smartphone powered with a Snapdragon 845. There have been leaked too many photos and info concerning the upcoming flagship. First, it was spotted with a codenamed of H8216. Then we learned there is another variant with a codename of H8266. Today some new information has become known related to this model. It turns out Sony enters the 6GB RAM phone nice. 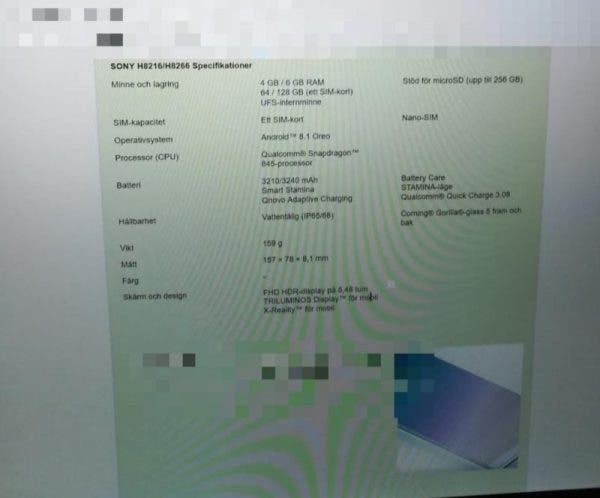 According to the spy photo leaked today, the Sony H8266 will be packed with a 6+128GB memory option. This is the first time when a Sony Xperia smartphones come with such a large memory. The photo also reveals the following specs list.

As you see, there are many top-notch features making the Sony H8266 stand out among others. First, it will join the full-screen trend. Moreover, this company could hit the jackpot due to the 4K resolution and great display technology (Bravia) used in its smartphones as well. No one can argue Sony has always come with the best screens. Second, Sony Xperia line flagships have always been the first to come with the latest Qualcomm processors. It was so last year. And it’s going to be so in 2018 as well. While Samsung, Xiaomi, and other manufacturer are fighting with each other to get the first bunch of SND845 chip, no one doubts Sony will be the first to announced a Snapdragon 845-powered flagship. Third, the leaked photo showed the Sony H8266 will sport a dual-camera module on the back. And as Sony is one of the best camera sensors makers in the world, it will bring the best of its lenses to its annual flagship, undoubtedly. Fourth, Sony models always come with waterproof ratings. This model won’t be an exception as well. Actually, this list is very long. So it’s better to keep waiting for the official announcement and make conclusions after it.