Today Xiaomi announced a few other Mi phones can upgrade to MIUI9. Those models include the Xiaomi Mi 3, Redmi Note 2, and Redmi Note 3. Thus it turns out we are dealing with a symbolic number – there are up to 27 Xiaomi phones getting the MIUI9 update on December 27.

Actually, the MIUI9 upgrade strategy differs from the one seen in MIUI8. Look, on July 26 Xiaomi officially released MIUI9. Next day it started working on the BETA version that was tested on a selected number of models. On September 28, the MIUI Team completed the development of the final version and announced it will push an update to up to 50 models even including the Mi 2 and Mi 2S.

However, there were some problems with the final version of MIUI9. The Stable Version started pushing out only on October 31. Currently, there are 27 models getting (or already got) their MIU9 update, which simply means other 23 models will get it soon. 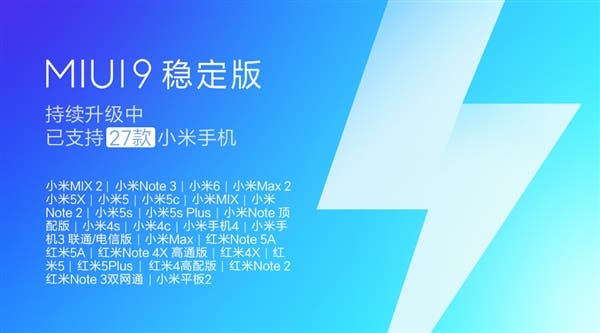 There are few ways to update to MIUI9. First, you should get a notification about the availability of the OTA update. Second, you can check for it yourself by going to Settings – My Device-MIUI Version. And finally, you can learn about it via the MIUI Forum.