Some days ago, IDC, a well-known research company released a report which detailed the global smartphone market shipments for the fourth quarter of 2017. This report showed that Apple led the pile followed by Samsung, Huawei, Xiaomi, and OPPO. Now, the statistical agency has released the smartphone ranking statistics in the Chinese market for 2017. Huawei is on top of the list with a total shipment of 90.9 million units which represented an 18.6% increase over the same period of last year and the company’s share also increased by 4% taking it to 20.4%. The second and third were OPPO and Vivo, respectively shipping 80.5 million units and 68.6 million units. Xiaomi moved beyond Apple to fourth place with shipments of 55.1 million units which is a massive 32.6% increase over the previous year while Apple dropped by 8.3% to 41.1 million unit shipments. 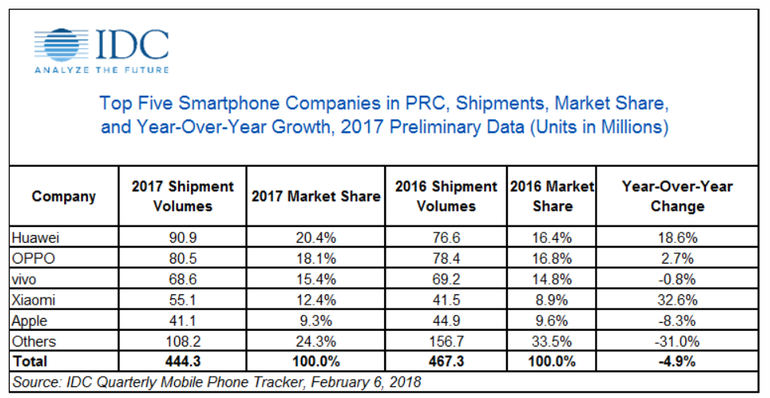 This chart by IDC did not spring up any major surprises because the new manufacturers in town did not significantly stimulate the market. In the fourth quarter of 2017, Huawei shipped 24.3 million units accounting for 21.3% of the market. IDC attributed Huawei’s performance to its Honor brand as well as its smartphones under $200. IDC concluded that Huawei’s sales of high-end devices in China ($600 and above) accounted for 8% which is four times the 2% it recorded in the previous year. Recall that Huawei’s president, Ren Zhengfei, recently said that the company will be concentrating on low-end and mid-range smartphones this year. According to him, 90% of the population go for these products.