Google Pixel smartphones have had a fair share of problems since its arrival last year. There has been series of complaints which include a burn-in on the OLED panel, voice recording bug in messaging app, screen flash when the phone is unlocked, faulty USB-C to 3.5mm headphone adapter, unresponsive screen edges and a faint buzzing sound during calls. While most of these issues have been handled, a couple of them are still pending and it appears that more issues are still emanating out of nowhere. About a week ago, we reported that the February security patch for Google Pixel smartphones will bring improved photography, well, what we didn’t know is that it will also come with some major issues. Recent reports on Reddit and Google Forums have it that the Pixel smartphones gets really warm (even with normal usage) and battery drains quite fast. 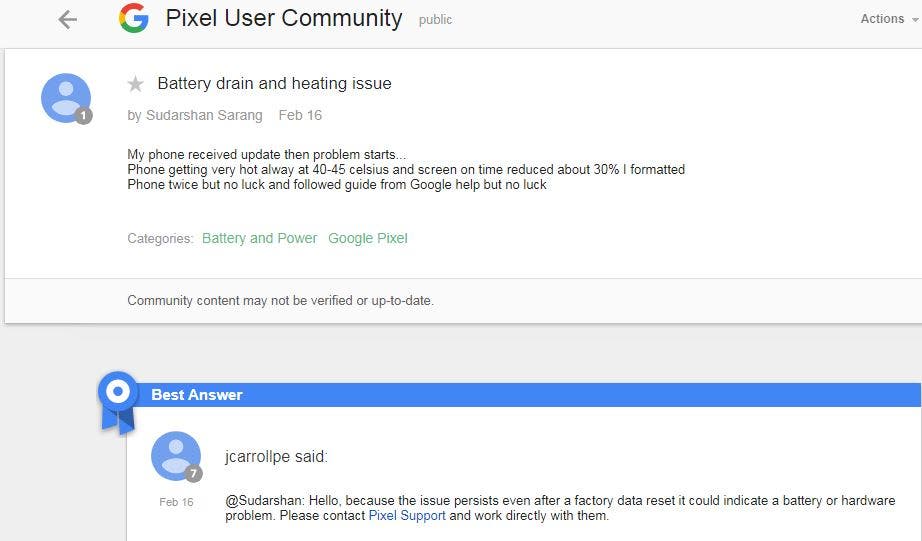 It appears that this issue is not consistent with all units as a few users have also reported that they are not facing these problems. Recall that the shift issue on the Pixel smartphone display is also not consistent. However, a good number of users have reported these issues and some even confirmed the persistence of this problem while the device is in safe mode thus this is probably not associated with third-party apps.

As of now, Google has not said anything with regards to this recent reports. If you have been experiencing similar problems, let us know in the comments.

Next [GizPoll of the Week] MIUI or Stock Android - Which Do You Prefer?