In recent times, Samsung has opened a couple of V-NAND chips plants notably in Pyeongtaek and Texas. Now, these plants are now been put to good use as the company commences mass production of its new 30.72 terabytes (TB) drive which is twice the capacity of its previous 15.36TB SSD released two years ago. This SAS drive – PM1643 uses a 64-layer and 3-bit 512-gigabit (Gb) chips. This drive does not only double the capacity of its predecessor, its performance levels are nearly twice too. The PM1643 clocks a random read speed of 400,000 IOPS, and 50,000 IOPS, and sequential read and write speeds of up to 2,100MB/s and 1,700 MB/s, respectively. This performance squarely exceeds the abilities of a typical 2.5-inch SATA SSD. 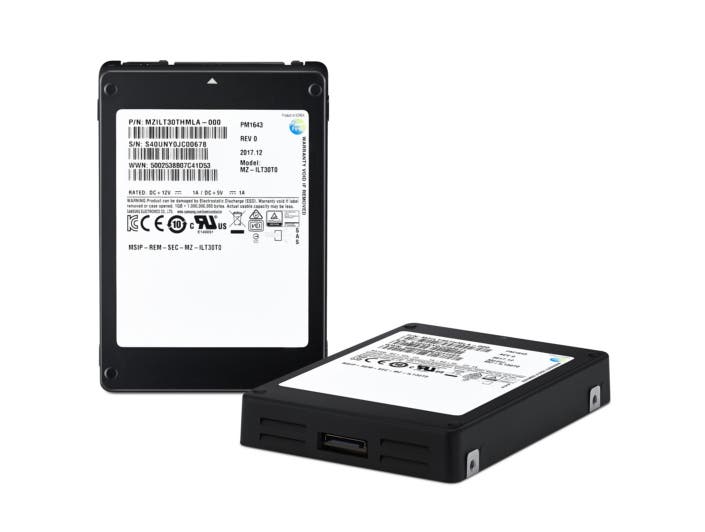 “With our launch of the 30.72TB SSD, we are once again shattering the enterprise storage capacity barrier, and in the process, opening up new horizons for ultra-high capacity storage systems worldwide,”…“Samsung will continue to move aggressively in meeting the shifting demand toward SSDs over 10TB and at the same time, accelerating adoption of our trail-blazing storage solutions in a new age of enterprise systems.”

For the first time, Samsung used Through Silicon Via (TSV) tech to interconnect 8Gb DDR4 chips to build 10 4GB TSV DRAM packages which give 40GB of DRAM in the PM1643. With an endurance level of one full drive write per day (DWPD), the PM1643 can write 30.72TB of data every day over the five-year warranty period without failure. The production of this drive commenced in January but it only recently commenced mass production.

As of now, there is no information on the pricing of this device but a 1TB SSD costs between costs $350 – $500 depending on your point of purchase thus it won’t be surprising if a $12,000 (minimum) price tag is slammed on this 30TB SSD.